Indian weightlifter Harjinder Kaur claimed a bronze medal in the women's 71 kg competition at the Commonwealth Games here despite not lifting her best in an event in which England's Sarah Davies broke a plethora of records to storm to the gold medal. 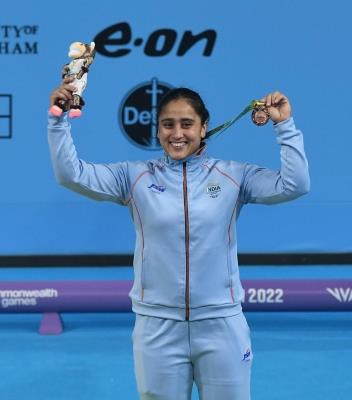 Indian weightlifter Harjinder Kaur claimed a bronze medal in the women's 71 kg competition at the Commonwealth Games here despite not lifting her best in an event in which England's Sarah Davies broke a plethora of records to storm to the gold medal. The 25-year-old from Mehas village near Nabha in Punjab lifted 93 in snatch and 119 in clean and jerk for a below-par total of 212 kg in the competition and at one time thought that she had lost out on a medal as Alexis Ashworth of Canada, the eventual silver medallist, lifted her season's best of 123 kg in clean and jerk to shoot up to 214 in the standings.Harjinder was also lucky as Joy Ogbonne Eze of Nigeria suffered a washout, failing to lift 125 kg in clean and jerk in three attempts. As she had lifted 100 kg, seven kilos more than Harjinder, the Indian would have been relegated to the fourth position if the Nigerian had succeeded.Harjinder's bronze medal was the third medal for India on Monday at the Commonwealth Games adding to the silver and bronze won by judokas Shushila Devi and Vikas Yadav. This took India's overall tally to nine medals -- three gold, three silver and three bronze. Harjinder's bronze medal was the seventh medal India had won in the weightlifting arena so far in this Games.However, it looked like India would have a barren day in weightlifting after bagging six medals in the previous two days. Earlier in the morning, Ajay Singh lost out a bronze medal by one kilogram and the way Harjinder started with a no lift in her first attempt in snatch, it looked like India was in for another setback in the final medal event of the day at the National/Exhibition Centre (NEC) here.Harjinder, who hails from a farming family and has built up her muscles by working on the chaffing machine at home, started with 90 kg for her first attempt but she failed. She lifted it in her second attempt and raised her tally to 93 kg in her third and final attempt.That put her in the fourth position behind Sarah Davies (103 -- a Commonwealth Games record in the snatch), Eze of Nigeria at 100, and Australia's Kiana Rose Elliott, who totalled 94. Alexis Ashworth was also in the mix at 91 kg after failing to lift 94.Harjinder waited for things to settle down in the clean and jerk and opened with 113 in her first attempt while Davies missed 120kg as did Eze at 125. She jumped to the top position but was pushed down soon as /Sarah Davies lifted 120 in her second attempt. Harjinder succeeded at 116 as did Ashworth. Eze again failed to lift 125.Things became tighter for Harjinder as she added three more kgs to her total after lifting 119 on her third attempt but Canada's Ashworth upped the ante by lifting 123, thus jumping to second with 214 kgs behind Davies with 229.If Eze of Nigeria had managed to lift 125 in her third attempt, her total would have shot up to 225, pushing Harjinder to fourth position.Harjinder, egged on by fellow weightlifters Mirabai Chanu, Punam Yadav, Bindiya and some male lifters, managed to do enough in the end to claim a bronze medal."I am happy with the bronze because I did not have a good day today and could not perform to the best of my ability. Somehow things did not look good initially but in the end luck favoured me as one lifter had a washout," said Harjinder after the medal ceremony.She said the support from her fellow lifters and the Indian spectators in the crowd egged her on and encouraged her to motivate her.
"We all lifters share a good camaraderie in the team and we all come to the stadium to support each other. I was there along with others to support Mirabai when she participated in her event. So, its nice to have your teammates shouting for you, encouraging you. Today it pushed me to put in that extra ounce of effort," said Harjinder.