CWG 2022: Renuka's 4/18 in vain as Ashleigh's 52 not out helps Australia defeat India by three wickets

Pacer Renuka Thakur's devastating spell of 4/18 went in vain as Ashleigh Gardner's 52 not out helped Australia defeat India by three wickets in first Group A match of women's T20 event in 2022 Commonwealth Games at Edgbaston. 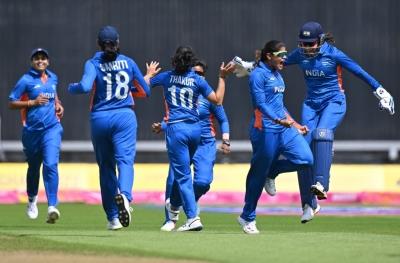 Pacer Renuka Thakur's devastating spell of 4/18 went in vain as Ashleigh Gardner's 52 not out helped Australia defeat India by three wickets in first Group A match of women's T20 event in 2022 Commonwealth Games at Edgbaston. After skipper Harmanpreet Kaur slammed 52 off 34 balls and opener Shafali Verma chipped in with a 33-ball 48 for India to make 154-8, Renuka's magnificent opening burst took out Australia's top four. With Deepti Sharma (2-26) taking out Rachael Haynes, Australia were in deep trouble at 49-5 and needed 89 runs off the last ten overs.But Ashleigh stitched stands of 51 with Grace Harris (37 off 20 balls) and 47 with Alana King (18 not out) to be unbeaten at 52 off 35 balls, hitting nine boundaries under pressure to take Australia to a cracking victory on cricket's comeback in the multi-sport event. They were also helped by the fact that apart from Renuka and Deepti, rest of the Indian bowling attack had an off day. Renuka's mayhem began from the second ball of the innings, forcing Alyssa Healy to poke at a full ball outside the off-stump and nicked to first slip. In her next over, she enticed Meg Lanning to cut a short and wide ball which dipped a bit, caught by forward diving backward point.Four balls later, Beth Mooney tried to cut behind point, but ended up chopping on to her stumps instead. Tahlia McGrath counterpunched with three boundaries off left-arm spinner Rajeshwari Gayakwad. But Renuka got her out with an inswinger and rattled the stumps through the gate as Australia were reduced to 34-4 in 4.1 overs.The total soon became 49/5 as Haynes tried to go inside-out over cover. But the thick outer edge was caught by point off Deepti. With half of the side back in pavilion, Grace had other ideas in her mind.Batting in a T20I for the first time since March 2016, Grace combined clean hitting with brute power to slam five fours and two sixes against the spin of Deepti, Rajeshwari and Radha Yadav. She was well-supported by Ashleigh Gardner, who took two boundaries off debutant Meghna Singh, in a 51-run partnership for the sixth wicket.In a bid to go big over cover, Grace went for the loft and was caught by Harmanpreet running to her left from near mid-off to take a reverse-cup catch off Meghna's bowling. With Deepti taking a sharp caught and bowled chance to dismiss Jess Jonassen, it seemed that India was racing to victory.But Ashleigh took advantage of some lacklustre bowling in the last five overs, hitting boundaries easily off Meghna and Radha. She then reached her fifth T20I fifty with a boundary muscled past diving mid-off before Alana finished off the chase with a slog through mid-wicket to help Australia snatch victory from jaws of defeat.Earlier, Smriti Mandhana gave India a good start with five delightful boundaries in 3.2 overs. But on the very next ball, she ended up edging the ball, which nipped away off the seam, straight to Alyssa off Darcie Brown.Shafali got going by dancing down the pitch and lofting over off-spinner Ashleigh's head. She had plenty of luck on her side, getting a drive just past Darcie's hands at mid-off. On the final ball of eighth over, Shafali had another huge slice of luck as Meg couldn't come near to taking catch at mid-on.At 20 off 21 balls after eight overs, Shafali smashed 28 runs in the next 11 balls, taking a hat-trick of boundaries off Tahlia McGrath. Despite a mix-up resulting in Yastika Bhatia's run-out, Shafali slammed a hat-trick of fours again, this time against Darcie before gloving a catch behind to Alyssa off Jess Jonassen as Australia got the decision in their favour via review.From the other end, Harmanpreet warmed up with leg-side boundaries off Darcie and Alana. She then took on Ashleigh for successive boundaries - a crunched pull through deep square leg was followed by an uppish cut wide of backward point. But Jess came back to take out Deepti, Jemimah Rodrigues and Harleen Deol to pick 4-22.  Harmanpreet continued to get boundaries through the leg-side, pulling and whacking through the gaps to get crucial runs for her team. One of the most delightful shots was Harmanpreet dancing down the pitch to smack Jess high over long-on.A wristy whip off Megan in the final over fetched Harmanpreet her seventh T20I fifty. Though she and Meghana Singh fell on the last two balls, it was enough to give India a fighting total, which wasn't sufficient to keep Australia away from a come-behind victory.
Brief Scores: India 154/8 in 20 overs (Harmanpreet Kaur 54, Shafali Verma 48; Jess Jonassen 4/22, Megan Schutt 2/26) lost to Australia 157/7 in 19 overs (Ashleigh Gardner 52 not out, Grace Harris 37; Renuka Thakur 4/18, Deepti Sharma 2/24) by three wickets