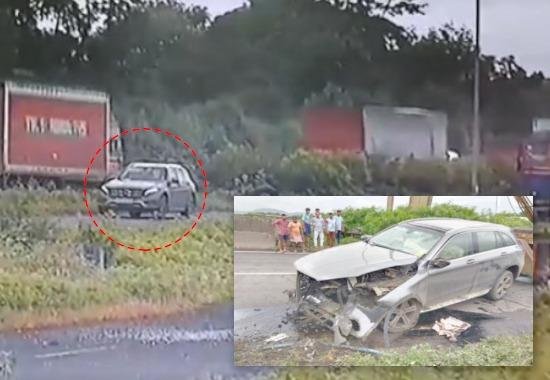 In the viral Cyrus Mistry CCTV video, it can be seen the Mercedes car in which Mistry along with Anahita Pandole, her husband Darius Pandole and Darius' brother Jahangir Pandole were travelling is seen on the road, moments before the terrible accident. The footage is allegedly from Palghar near Mumbai. As per Police officials, the Mercedes car crashed into a road divider near Charoti village on a bridge over the Surya river.

Another Visuals of the high-end car in which was travelling...this is in near Mumbai ...at a distance from here, the accident took

Why was Cyrus Mistry sacked as TATA Sons chairperson? The controversy with Ratan Tata and all that you must know

Coming to Cyrus Mistry accident, the former Tata Sons chairman along with 3 others were returning from Zoroastrian Fire Temple in Gujarat's Udvada on the occasion of 'Behram Roj'. Mistry's car met with an accident in Maharashtra's Palghar district while returning to Mumbai. The Police in their statement informed, "Around 3 pm, the car met with an accident as it crashed into a divider on the bridge above Surya River while travelling from Ahmedabad to Mumbai. Four people were inside, out of them two people died on the spot and the rest two were shifted to a hospital."

Anahita Pandole (55), a well-known gynaecologist, and Darius Pandole (60) survived the crash, while Mistry (54) and Jahangir Pandole, brother of Darius, were tragically killed in the accident, which occurred around 3 pm, about 120 km from Mumbai.