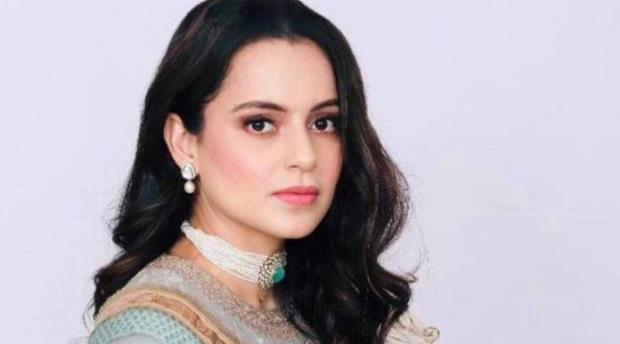 Another case has been lodged against Bollywood actor Kangana Ranaut for an Instagram story where she has allegedly called the entire Sikh community as Khalistani terrorists and also stated that former prime minister Indira Gandhi had crushed them "like mosquitoes" under her shoe and the community still fears her.

The police complaint has been filed by the Delhi Sikh Gurudwara Management Committee (DSGMC) on Saturday at the cyber cell of the Mandir Marg Police Station for using derogatory language against the Sikh people.

Akali Dal leader Manjinder Singh Sirsa who is also the president of the Delhi Sikh Gurudwara Management Committee in his complaint said that Kangana in her recent Instagram post had "intentionally" and "deliberately" defined the farmers’ protest as a "Khalistani movement", reported by news agency PTI.

“The actor should be either put in jail or a mental hospital”, said Sirsa as he reacted to Kangana’s insensitive statement on the repeal of the three contentious farm laws

"Kangana's statement highlights a very cheap mentality. Saying that the three farm laws were repealed because of the Khalistani terrorists is a disrespect to the farmers. She is a factory of hate," he alleged.

"We demand strict action from the government for her hateful content on Instagram. Her security and Padam Shri must be withdrawn immediately. . She should either be put in a mental hospital or in jail," said Sirsa. 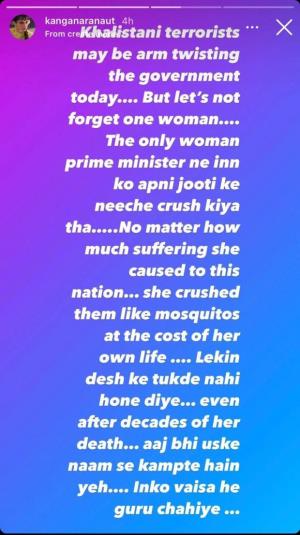 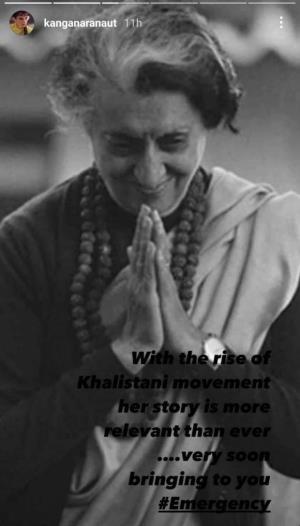 Ranaut in her post had written: "Khalistani terrorists may be arm twisting the government today. But let's not forget one woman. The only woman prime minister ne inn ko apni jooti ke niche crush kia tha (The only woman prime minister crushed them under her shoe) No matter how much suffering she caused to this nation she crushed them like mosquitoes at the cost of her own life Lekin desh ke tukde nahi hone diye (but didn't let the country disintegrate) even after decades of her death aaj bhi uske naam se kaampte hai yeh inko vaisa he guru chahiye (even today, they shiver at her name, they need a guru like her)."

This Instagram story was followed by another with the picture of Indira Gandhi that said: "With the rise of Khalistani movement her story is more relevant than ever very soon bringing to you #Emergency". This post is a reference to her upcoming project she would be working on which is named “Emergency”.

However, her remarks on Sikhs being Khalistanis and Operation Blue Star of 1984 was not well received by people and especially by the community she has targeted.

Meanwhile, another complaint has been filed by the Indian Youth Congress (IYC) has filed a complaint at Parliament Street police station on the same day for allegedly making “seditious” remarks on social media. The complaint has been registered by IYC national secretary Amreesh Ranjan Pandey and co-coordinator of the IYC’s legal cell Ambuj Dixit.

Their complaint stated that: “Kangana Ranaut is a renowned actress and has a huge fan following of more than 7.8 million people on Instagram. Therefore, her intentional, irresponsible, and seditious posts have the ability to excite hatred, contempt and disaffection towards the Republic of India.”

Alleging that she has equated the country’s freedom gained in 1947 to ‘begging’, the complainant claimed that her claims about freedom fighters and leaders of the national independence movement are shameful.

“The complaint has been filed seeking registration of an FIR against the actress under IPC sections 124A (sedition), 504 (intentional insult with intent to provoke breach of the peace) and 505 (statements conducing to public mischief),” said a senior police officer.

Kangana Ranaut who has come out as a supporter of the BJP government had posted these on Instagram just a day after prime minister Modi announced that he will repeal the three farm laws after 14 months of protest by the farmers. It is to be noted, most of the agitating farmers belong to the Punjab region.

The Gurudwara committee in its statement said that the actor has passed "derogatory and insulting" language against the Sikh community.

She has further called the Sikh community Khalistani Terrorists, and “recalling the massacre and genocide that happened during 1984 and earlier, as planned and calculated move on part of (late former prime minister) Indira Gandhi," the statement alleged.

Kangana has been under receiving severe criticism over her 1947 Independence was a “bheek” comment and that the country got true freedom after 2014.