Axar Patel or Ravindra Jadeja? Know what difference Salman Butt points out between the two

Both all-rounders Axar Patel and Ravindra Jadeja have been included in India's team for the two-match Test series against New Zealand. 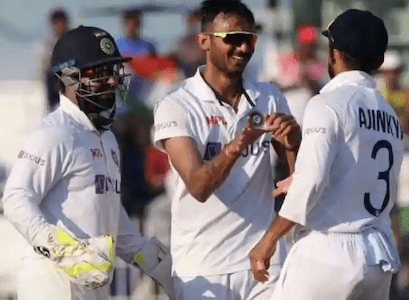 Salman Butt, a former Pakistan cricketer, commended Indian all-rounder Axar Patel, calling him "extremely talented," but he also chimed in on the comparison between Patel and veteran all-rounder Ravindra Jadeja, saying the latter is a "complete player."
The 27-year-old Axar was a part of India's 3-0 victory against New Zealand in the three-match T20I series. In the series, he got four wickets and was a key component in the third and final match, when he took 2 important wickets.
Butt added on his YouTube channel, "Although Axar Patel is a gifted player, Ravindra Jadeja is a complete player. He is a superb team player whether batting, bowling, or fielding. As a result, when one player leaves, his successor will undoubtedly arrive."
Butt compared Axar to Ravindra Jadeja, who did not participate in the T20I series since he was one of the best players resting.
"You have Axar Patel if you don't have Jadeja, but I don't think Axar and Jadeja are in the same category right now. Axar is a gifted player who has the potential to seize that spot in the future, but Jadeja is the superior alternative right now "Butt said.
"I believe there are a couple of excellent spinners. One is Ashwin, while another is Nathan Lyon. They're high-end spinners. Yasir Shah hasn't had much of a chance to play recently. He took 200 wickets in a short period of time "Butt said.
"I believe there are just a few spinners in the world now who can do well in Test cricket. Keshav Maharaj is also a fantastic spinner "Added he.
Both all-rounders Axar Patel and Ravindra Jadeja have been included in India's team for the two-match Test series against New Zealand, which begins on Thursday (November 25).