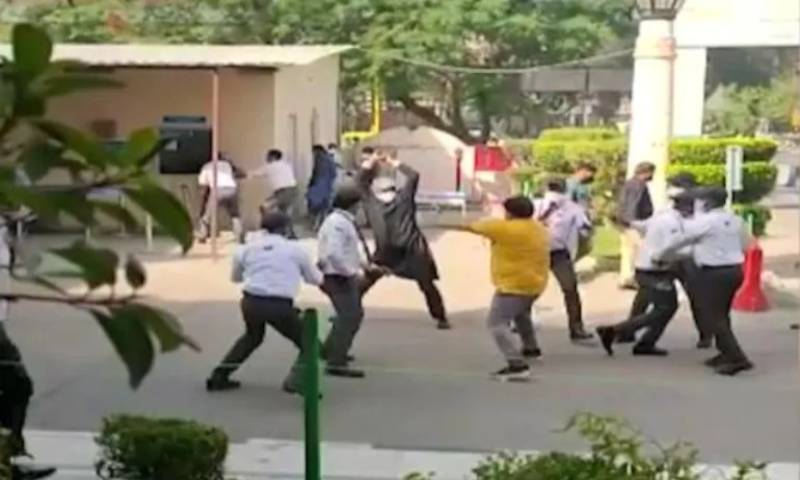 The medical infrastructure of the nation has collapsed due to an overwhelming number of the latest COVID-19 infection cases. People of Delhi, Uttar Pradesh, and many other states are suffering as there are no vacant beds, oxygen cylinders in the hospitals. Somehow, the doctors across the nation have also admitted that this second wave of coronavirus has hit India harder than before and the latest strain of the virus carries a potential threat.

With the daily record-breaking spike in the Covid positive patients, even doctors of the Delhi-NCR have failed to provide beds to the sufferers. Many patients have died on road, waiting for their chance to get into the hospitals. In the series of heart-wrenching incidents, one more has added after a Delhi patient succumbed to the infection on Tuesday morning.

Anguish with the death of a woman (67), who was admitted to the emergency ward due to the ICU bed shortage, her attendants attacked doctors and nurses. The incident took place between 8 am and 10 am at the Apollo Hospital in which an unspecified number of hospital staff including doctors were injured. Upon receiving the information, the police arrived at 11 am.

However, the injured staff members have been called back by the hospital as the sheer number of patients require medical assistance and care when the city is battling against a catastrophic disease.

The 27-second video of the incident is also doing rounds on the internet in which a group of men fighting in the hospital vicinity could be seen. A masked man in a grey shirt could be seen attacking a man in a yellow shirt with a lathi as three-four others try to detain him. Later, the man in a yellow shirt runs away with his attacker. In another clash, a man in red and other in a white shirt can be seen trading kicks and punches.

Reportedly, some damage has been done to the hospital’s property.

On this incident, the Apollo Hospital had issued a statement asserting that they had received a woman in a "critical condition" at the Emergency in the early hours of Tuesday.

"Immediate medical attention appropriate to her condition was given by the team. Given the paucity of beds, the family was advised to shift the patient to another facility with available beds. Unfortunately, the patient died around 8 am, post which the patient's family members resorted to vandalism, destruction of hospital property, and assault on our doctors and staff," the statement said.

"While the hospital deeply condoles the death of the patient, it is deeply shocked at the behaviour of the patient's family against doctors and healthcare workers who are providing untiring services amidst the pandemic," the hospital said.

Delhi, on Monday, recorded 380 COVID deaths, the highest in a day. For the fifth successive day, the city witnessed over 300 deaths due to infection.