Economy on course to achieve 7% growth in 2022-23: Finance Secretary

India's economy is on course to achieve 7 per cent growth in 2022-23, Finance Secretary T.V. Somanathan said on Wednesday. 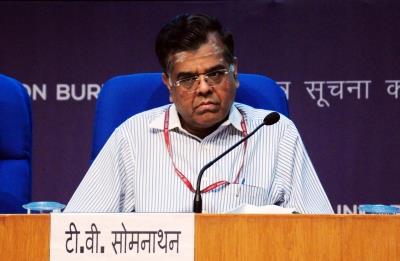 India's economy is on course to achieve 7 per cent growth in 2022-23, Finance Secretary T.V. Somanathan said on Wednesday.

Addressing a press conference after the release of GDP data on Wednesday, which showed that first quarter growth in the current fiscal stood at 13.5 per cent, down from 20.1 per cent growth recorded in the corresponding period of last year, he said that India's GDP has crossed pre-pandemic levels.

"India is on course to achieve 7 per cent growth in the current fiscal," Somanathan said.

Somanathan also said that the government is on course to meet the fiscal deficit target for the current fiscal.

The country's fiscal deficit is projected at 6.4 per cent of the GDP for this fiscal ending March 2023 as against 6.71 per cent for the previous year.

Difference between total expenditure and revenue of the government is called fiscal deficit.

At the same time, Somanathan added that there could be more spending on food and fertiliser subsidy during the current financial year.

There would no restrictions on government's capital expenditure, he said.

The Finance Secretary also informed that the Government will stick to the current fiscal's borrowing target.

The government plans to borrow Rs 11.6 lakh crore in 2022-23 to meet its expenditure requirements.

Secretary, Economic Affairs Ajay Seth, who was also present on the occasion, said that the gross capital formation is highest in 10 years in this quarter.

He said that July's GST collection is seen at Rs 1.4 lakh crore.

He informed that the volume of e-way bills generation in August registered a year-on-year growth of 15 per cent at Rs 7.56 crore, indicating robust domestic economic activity.

In the April-July period of the current financial year, fiscal deficit narrowed to 20.5 per cent of the budget estimates as compared to 21.3 per cent in the corresponding period of last year, he added.