The game was essentially a formality for Gareth Southgate's table-topping Three Lions, who led 6-0 at halftime thanks to goals from Harry Maguire, Kane's four strikes, and a San Marino own goal. 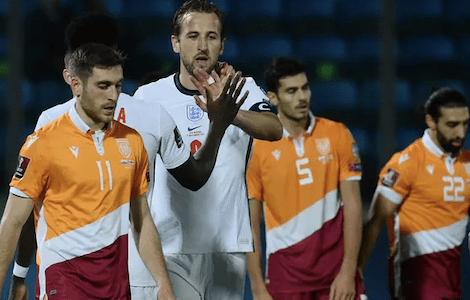 On Monday night, England earned their place in the 2022 World Cup in Qatar with a 10-0 away win over San Marino to finish first in Group I. Harry Kane scored his second hat trick in as many games and finished with four goals.
Also Read: Hardik Pandya’s watches worth 5 crore seized by customs official at airport
The game was essentially a formality for Gareth Southgate's table-topping Three Lions, who led 6-0 at halftime thanks to goals from Harry Maguire, Kane's four strikes, and a San Marino own goal.
Also Read: No Indian in ICC's team for T20 World Cup, Pakistan's Babar named captain
Maguire opened the scoring with a spectacular header early in the first half, before Filippo Fabbri diverted a Bukayo Saka attempt into his own net and Kane converted a penalty after a VAR-assisted handball verdict against the hosts.
Smith, Emile Rowe set up Kane for his second goal of the half, which he added from the penalty spot, before adding his fourth goal of the half with a clinical finish from close range.
Smith Rowe scored his first senior England goal early in the second half, while Kane was replaced around the hour mark.
Kane became the first England player to achieve back-to-back hat tricks since Tommy Taylor in 1957, and the first to score four in a match since Ian Wright against San Marino in 1993, as he increased his calendar-year total to 16.
It was also the first time England had scored ten goals in a game since a 10-0 victory over the United States in 1964.
Southgate's side scored 38 goals in winning the group by six points over Poland, their biggest total in any European or World Cup qualifying campaign.
All of this must be countered by the fact that, in addition to facing San Marino, who have only won once in 186 internationals, England also faced Andorra, a team with not a good record.
Things will get tougher from here on out, but they will be one of the favourites to win in Qatar.
"Fantastic. We were supposed to win tonight in the final game, but we played great. "It's fantastic to get through," Kane, who is now only five goals behind England's all-time leading scorer Wayne Rooney, said.
Substitutes As the second half progressed, Tammy Abraham and Tyrone Mings scored goals, and Saka added another, as England continued to thrash Group I minnows San Marino.
The second half was mostly academic, however Conor Gallagher made his debut and Jude Bellingham was disappointed after his first England goal was called off.
"We can't change the level of opposition," Southgate added, "but the mentality and the way they [England's players] applied themselves was fantastic."
The win propelled England to the top of their qualifying group, ahead of Poland, who were forced into the playoff round after losing to Hungary.