Explained: Is Lambda variant of Covid19 deadlier than Delta variant?

World Health Organization (WHO) has designated Lambda as a “variant of interest” fearing it is more transmissible than the original virus. 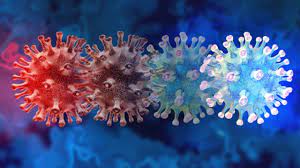 Where the delta variant of coronavirus is still wreaking havoc in several countries, another variant called ‘Lambda’ is anticipated to be more deadly. Many scientists and health experts are seeing Lambda as a new emerging threat, meanwhile, UK Health Ministry has announced this variant to be more dangerous than delta.

What is Lambda variant?

The SAR-CoV-2 variant, Lambda, previously known by its scientific name C.37 is not new. It is a dominant strain in Peru and has recently spread in more than 25 countries.

World Health Organization (WHO) has designated the virus as a “variant of interest” fearing it is more transmissible than the original virus.

So far, the variant is not detected in India, however, recently been detected in the UK and other European countries.

Where did it originate?

Lambda variant has been around since August of last year and is believed to be originated in Peru. In Peru, the variant accounts for over 80 percent of cases, dominating neighbouring Chile as well.

Recently the variant has been detected in several South American countries such as Ecuador and Argentina.

The variant has been found in more than 25 countries, however, the number of cases is relatively small. In the UK, only six people have been found infected with the variant, all were international travelers.

Also Read: Not only Delta Plus, 3 other variants of Covid-19 that are threatening

How is it more dangerous than Delta variant?

Where Delta variant holds three mutations, Lambda has at least seven significant mutations in the spike protein. This variety of mutations can result in increased transmissibility or enhanced antibody resistance in viruses.

In simpler words, the variant might decrease the effectiveness of vaccines.

"Lambda carries several mutations with suspected phenotypic implications, such as a potential increased transmissibility or possible increased resistance to neutralizing antibodies,” said WHO.

According to a recent study conducted in Chile, the Lambda variation was more infectious than the Alpha and Gamma versions (known to have originated in the UK and Brazil respectively). The Chinese Sinovac vaccination (Coronavac) was similarly shown to be less effective against the Lambda variant.

So far, not much is known about the variant due to a lack of researches. WHO has stated that “There is currently limited evidence on the full extent of the impact associated with these genomic changes, and further robust studies into the phenotype impacts are needed to better understand the impact on countermeasures and to control the spread.”

More researches are required to confirm whether vaccines are effective on the variant or not.

WHO has classified lambda strain as a variant of interest. This means it is something we should look out for. The genetic changes involved are predicted to affect transmissibility, severity and immune escape.

Is Lambda variant a threat to India?

Lambda variant has not been detected in India or its neighbours yet. Only Israel has reported the variant in Asia.

The variant has been detected in several European countries such as Germany, UK and Italy from where travel to India is quite frequent.

The variant has the ability to bypass vaccination-induced immunity thus can result in a fresh wave of infection and must be kept under surveillance to prevent the spread in India.