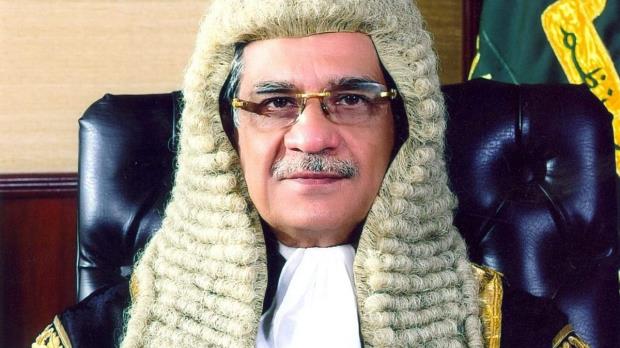 An audio clip of a few seconds has rocked politics in Pakistan and have left citizens perplexed. After hearing the conversation between Chief Justice Mian Saqib Nisar and an unidentified person, the people of Pakistan are questioning their faith in the judiciary. The leaked audio confirms that the Pakistani Army and Judiciary colluded against Nawaz Sharif and his daughter, Maryam Nawaz before the 2018 elections just to bring Imran Khan to power.

The audio, which was made public by Noorani, included recordings of Nisar allegedly giving a judge orders to imprison former Prime Minister Sharif and his daughter.

Former Chief Justice Nisar, on the other hand, denied the accusations. He said that the voice in the audio is his, however, the clip was fabricated.

“I never contacted any judge of accountability court to order him to pass any verdict against Nawaz Sharif or his daughter. Why I would do that. I have no grudges against Mian Nawaz Sharif,” said ex-CJP.

He went on to say that no one from the Pakistan Army or the Inter-Services Intelligence (ISI) ever contacted him or put any pressure on him regarding this matter.

But, Fact Focus claims that it first accessed the clip two months ago and sent it for verification. Garrett Discovery, a leading American firm specialising in multimedia forensics, forensically examined the audio. According to the Fact Focus report, the firm's analysis certified the audio file's integrity and stated that "this audio has not been edited in any way."

What is in the audio clip?

The rough translation of audio is:

Chief justice Nisar- "Let me be blunt about it; unfortunately, it is the 'institutions' who dictate judgments here. We will have to imprison Mian Sahib in this case. We'll bring Khan Sahib, 'they' say. We will have to do it, regardless of the merits, and even to his daughter."

Unidentified person- "But, in my opinion, his daughter does not merit a sentence."

Nisar- “You are absolutely correct. I did talk to ‘friends’ that something be done about this but they did not agree. There will be no independence of the judiciary, so let it be”

#SaqibNisarExposed trends on Pakistani Twitter after the big revelation.

Ahsan Iqbal, Pakistan's former minister of interior and planning and the secretary-general of the Pakistan Muslim League (N), said Nisar had to "explain his position" after the clip revealed an "open secret in Islamabad."

Tahir Bhatti, who claims to be the Vice President of the PML-N’s Social Media Wing has demanded that Nisar be charged with "treason." Mian Mujeeb UR Rehman, a researcher and columnist, has also called for "reprehensible punishment."

"The current Chief Justice Gulzar Ahmad must initiate a judicial inquiry in this case," said journalist and anchor Hamid Mir on Twitter, while columnist and anchor Saleem Safi sarcastically wrote, "The judiciary is completely independent."

Where are Nawaz Sharif and daughter Maryam?

The viral audio clip is of days before the 2018 Federal Elections. Imran was then climbing containers to hold rallies in Islamabad and Nawaz was charged with corruption, theft, and defaming the army.

After the Panama Papers leak and other cases, Nawaz was sentenced to ten years in prison, while his daughter Maryam was sentenced to eight years. He was imprisoned. Nawaz later travelled to London for treatment and has yet to return.

Maryam appealed against the sentence after which Islamabad High Court suspended her sentence.