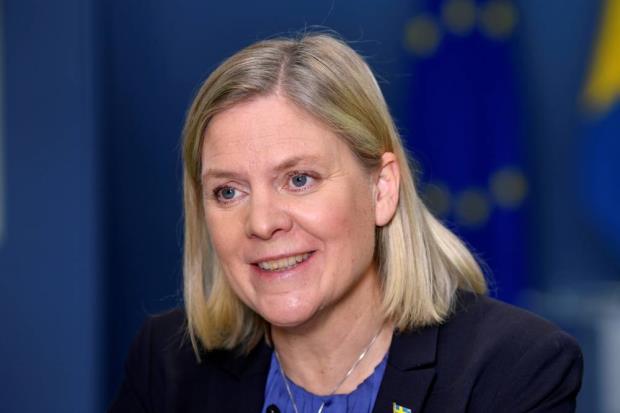 In just less than 12 hours of being appointed as Sweden’s first lady prime minister, Social Democrat Magdalena Andersson resigned from the top post after the Green Party quit their two-party coalition, accelerating political uncertainty. The 54-year-old leader is a “bulldozer” who faces a tough battle, is trying to keep away an unprecedented challenge by the right-wing and far-right in the upcoming general elections slated for next year.

Short blond hair, Andersson is a no-nonsense attitude woman, who calls herself a "nice, hard-working woman" and someone who likes to be in charge.

She has told the speaker of the parliament that she hopes to be appointed again as the prime minister but as the head of a single-party government and the likelihood of that thought is fairly possible if it receives strong support from other parties.

Sweden’s Green Party quit after the coalition’s budget bill was rejected by the parliament.


Andersson in a media conference said, “I have asked the speaker to be relieved of my duties as prime minister,” adding that, “I am ready to be prime minister in a single-party, Social Democrat government.”

"People even say they are scared of her which is kind of funny, these elite political scientists or professors of economics saying they are afraid of her," said Anders Lindberg, political editor at daily Aftonbladet.

Andersson, who has been considered extremely skilled and competent during the seven years as finance minister, is known for her slogan, "Sweden can do better".


The Green Party has certified to support Andersson in any new confirmation vote in the parliament, on the other hand, the Centre Party has assured to avoid, which as per the system amounts to backing her candidature in the run. Meanwhile, the left party has also said it would support her. Although all these parties could not agree on a budget, they are united in the intention of keeping the Sweden Democrats, a populist, anti-immigration party in holding a role in the country’s parliament.


“The Centre Party will open the door for her (Andersson) to be prime minister,” its leader, Annie Loof, said on Twitter.


“We will make sure, again, that Sweden can have a government that is not dependent on the Sweden Democrats,” she added.

The Opposition right-wing Moderates and Christian Democrat also receives support from the Sweden Democrats, however, cannot manage a majority in parliament.

Magdalena Andersson had taken the top job as the prime minister of Sweden from Stefan Lofven as head of a minority two-party coalition, backed by the Left and Centre parties; but the alliance collapsed when the Centre Party denied supporting the new government’s finance bill. Then the parliament had passed spending plans on Wednesday was put to a brake by three opposition parties that led the Green Party to quit the coalition and Andersson was left with no option but to resign from the post.


Now the Speaker of the parliament will decide on the next step on finding a new government. But it is said the speaker will keep Andersson forward for a new vote in the coming days.


In a note, a banking group Nordea said: “We expect the Left, Green and Centre parties to abstain in the upcoming vote and therefore effectively approve Andersson as Prime Minister again. In other words, the political chaos is over as long as nothing more unexpected happens.”

As the country goes for a national election next year in September, whoever is again elected as the prime minister will face many challenges. Gang violence and shootings in major cities are one problem decaying life in Sweden. Coronavirus pandemic has revealed the gaps in the highly praised welfare state and the government has to pick up the shift to a green economy if it has to meet the climate change goals.

The centre-left and centre-right alliances are basically on a level in the election.

The fact that it took this long for Sweden to get a female prime minister is upsetting for many in the country as it has been the first to introduce universal suffrage 100 years ago and has continuously advocated gender equality.

Neighbouring country Norway appointed its first woman leader 40 years ago, while Sri Lanka was the first nation to have a woman head in 1960.