Samukta Kisan Morcha has been leading the farmers’ protest in Delhi. 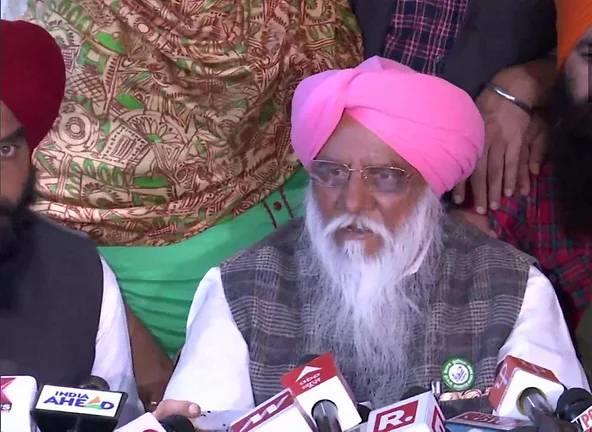 Samukta Kisan Morcha leader Balbir Singh Rajewal while addressing the media on Sunday afternoon has announced that farmers unions have discussed the repeal of farm laws and informed that a few decisions were taken in the meeting.

Samukta Kisan Morcha has been leading the farmers’ protest in Delhi.

SKM farmer leader Balbir Singh Rajewal who was addressing the reporters at the Singhu border said that the SKM’s pre-decided programs will continue according to the schedule. “Kisan panchayat in Lucknow on 22nd, gatherings at all borders on 26th and march to Parliament on 29th,” he said.

Further, he added that several pending key things have to be discussed. For deciding on further developments another meeting of the SKM will be called on November 27th, while decisions will be taken based on the situation until the meeting is held.

“We'll write an open letter to the Prime Minister. Pending demands will be mentioned in it - MSP Committee, its rights, its the time frame, its duties; Electricity Bill 2020, withdrawal of cases. We'll also write to him to sack the Minister (Ajay Mishra Teni) over Lakhimpur Kheri, said Balbir Singh Rajewal.

Appreciating PM Modi’s decision on repealing the farm laws, Mr Rajewal called it “a good step”, however, added that there are a lot of things that are still not discussed.

Though the government’s decision of repealing was welcomed by the farmers and farmer leaders, many said there are a few other important things that require a thorough discussion.

The farmers’ focus has now shifted to minimum support price (MSP) and are demanding a law on it. They are also demanding fair compensation for those farmers who died during the year-long protest and cancelling the police cases that have been registered against them at several police stations.

Also Read: BJP confident of regaining lost ground in UP after rollback of farm laws

The farmers have been protesting against the three farm laws since last November and alleged that those laws will strip them of their earnings and keep them at the mercy of big corporates.

Meanwhile, SKM leader Darshan Pal and Bharatiya Kisan Union (BKU) leader Rakesh Tikait after PM Modi’s announcement of repealing the farm laws on Saturday had pointed out that a government guarantee of Minimum Support Price (MSP) for crops is important to farmers as they are linked to the farmer suicides across the country.