The drone could travel a distance of a maximum speed of 15m/s along with flying up to 10 meters in height. 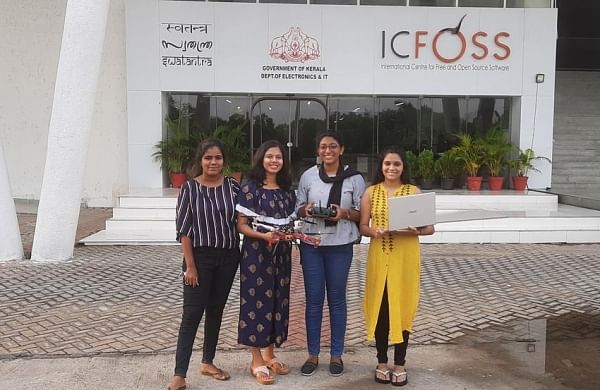 Other than taking pictures, aerial view and surveillance, drone aircraft without a pilot can also be used in several unique ways. The most challenging task was to locate stranded people in thickly populated villages and towns that occurred in 2018. Rescue workers couldn’t reach those stranded people on time due to the heavy water clogging. To avoid such situations again in the future, students from Government Engineering College, Thrissur, conceived a solution for this issue as a part of their final year project - a drone that can help track down stranded people during natural calamities.

Sruthi M S, Nandana V N, Lakshmi S and Manal Jaleel Poovathingal three students from the Students of the Electrical and Electronics Engineering department came up with this unique and needed innovation.

Showing light on their innovation, Shruthi said, “After several brainstorming sessions, we zeroed in on the drone project to make rescue operations easier."

The project was crafted under the guidance and help of Rajesh K, assistant professor of the Electronic and Electronics Engineering department of the college.

Also Read: #FirstStoryPositive: Hyderabad-based innovator, has made it easy for women to find clean toilets

“The drone uses a YOLO v5 algorithm, which means it is a single-stage object detector. This feature helps in detecting only the humans in isolated areas," Shruthi said, adding that it will also mark the location of the detected people on the map. The drive will also help to find the real-time information and details of those who are involved in the rescue operations, for example, rescue services officers, police and firemen, she added.

The drone could travel a distance of a maximum speed of 15m/s along with flying up to 10 meters in height.

The innovation team informed that the drone was made utilizing the parts that were open-sourced and coated around Rs 24,350. The money used in completing the drone was used from the funds raised by the team.

This drone is cheaper than the typical commercial drones which can be bought at an expense of Rs 50,000

"The technical assistance for the project was provided by the International Centre for Open Source Software (ICFOSS),” the team said.

The three youngest innovators have recently bagged the first spot on the final year project awards 2021, which is awarded under the hardware stream.

The award event is organised by Genskill in union with IEEE LINK and Strategic Initiatives academic engagement, IEEE Kerala section.