“I m not ashamed of my scars, I am happy who I am,” wrote a fitness and yoga instructor while posting a video of a headstand without her prosthetic legs. 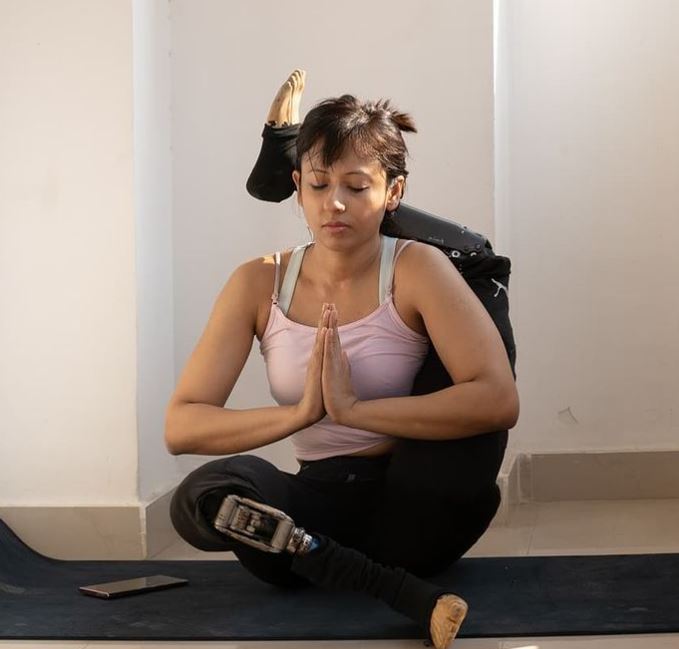 We come across many stories in a day that inspires and motives us to never give up. Today here is an inspiring story of Arpita Roy, an amputee yoga instructor, who is giving hope to others.

Arpita lost her legs in an accident in the year 2006 and from being unable to walk, to walk on prosthetic legs to performing headstands and other difficult yoga asanas and postures, Arpita has come a long way.

In 2006, she met with an accident, which changed her life completely. The bike, on which Roy was sitting, hit a lorry which crushed her both legs. She told a media organization, The Indian Express, “I fell from the bike and a lorry coming from behind crushed my legs. I almost lost my life, but the doctors kept giving me blood, and my pulse came back.”

Also Read: FirstStoryPositive: Journey of Durvesh Yadav who fought depression, failure to emerge as an inspiration

“My recovery took time as 80 percent of my body was affected with gangrene,” she continued.

Eight months later, a doctor gave her a pair of prosthetic legs, and slowly she started learning how to walk with them but the social stigma of being ‘disabled’ always haunted her. Gradually this discrimination started bothering her family as well.

After going through an emotional rollercoaster, Arpita finally decided to focus on herself rather than society. Gradually, she started loving her body and starting yoga and other exercised to remain fit. However, initially working out in artificial limbs was difficult but she tried hard.

In 2015, she became a yoga professional and started taking yoga and fitness classes. “Some flows and asanas I had to customize. Then slowly I started learning about the different aspects of yoga-like asanas, Pranayama, meditation,” she said.

Her confidence was boosted after she got a healthy response through social media as well. Many athletes appreciated her.

She won twice from Puma India. Then, she got featured on Yoga Journal, Amputee Coalition and a few other Instagram pages.

At last, she said, “I suggest that differently-abled people should first accept and love themselves rather than think what others feel. I always believe tough times never last but tough people do.”