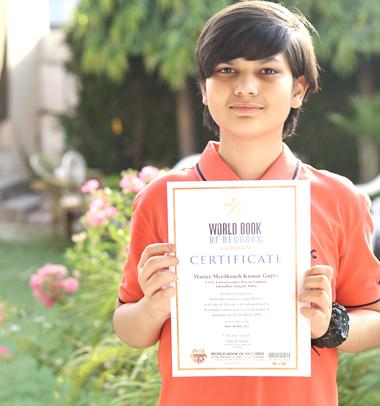 An 11-year-old city boy Meedhansh Kumar Gupta, who designed websites for several pandemic-driven campaigns of state government, has got his name registered in the World Book of Records, India Book of Records and World Health Organisation as the ‘Youngest Corona Warrior’.

Ever since Covid pandemic began last year, Meedhansh has devoted his entire time as a website developer by launching various Corona related websites for awareness in the society. He has also received four different types of certifications from WHO (World Health Organization), which he obtained by passing his examination by taking four different courses at a young age.

In fact, Meedhansh is the youngest to pass this WHO test. Apart from the World Book of Records, the name of Meedhansh has been recorded in the India Book of Records as the Youngest Corona Warrior. 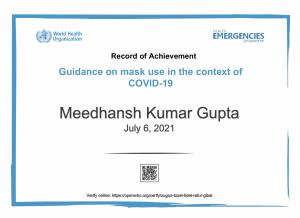 Divulging details about his websites, Meedhansh said he first developed www.coronafreeworld.com, which was launched on 20 March 2020, in which a helpline number was issued so that the general public could consult a doctor sitting at home. 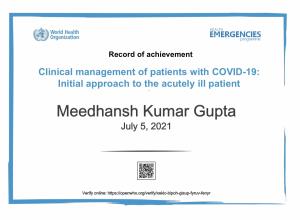 He said by the end of last year, he launched another website ‘www.stayalertstaysafe.in’, the main reason for launching it was to spread a positive awareness in the society. He said through this website he ensured that message of Prime Minister Narendra Modi i.e. "stay alert stay safe” was spread to maximum people and they abide by it.

He further said that the main objective behind making all these websites of was to do something for the society.

“I used to gather positive news from various social resources and publish it on my website along with WHO guidelines, videos, prevention tips etc”, he said.

Also Read: Meet Pathankot-based Muskaan Kohli, who has been honoured with Diana Award

Meanwhile, Meedhansh’s parents Sandeep Kumar Gupta and Monika Gupta both supported him in developing all his websites. His parents informed that he is at present running his company Entreprocoder as a CEO where he teaches and guides coding to other kids along with developing various projects.

They further said that Meedhansh has been honoured by EACC (European Asian Chamber of Commerce) as the youngest entrepreneur at International Business Networking event last October 2019.