D Indra of Tamil Nadu is the head of ‘Prem Illam,' a charity that helps disabled children and people impacted by the COVID-19 pandemic. She grows organic food to feed her village's children as well as those in the surrounding area. 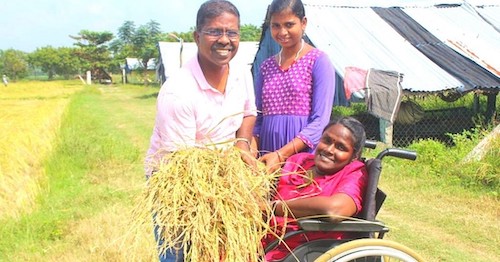 'D Indra', a wheelchair user, was admitted to a shelter home for children with mental and physical disabilities when she was just four years old. She was only allowed to see her parents and older sister on weekends, so she understood the pain of being separated from loved ones in times of need.

Indra, now 36, is ensuring that people in her village find relief and comfort in the aftermath of the COVID-19 pandemic and subsequent lockdown. She operates 'Prem Illam', a shelter house of Prema Vasam, an organisation for children with disabilities, in Sirunallur village, Tamil Nadu.

Indra began farming in 2019 in order to give healthy, organic food to the children of Prem Illam. She enhanced the yield when the lockdown was implemented. She nourishes with lunch to those who are affected financially or as a result of COVID-19. She's also fed youngsters whose parents had been afflicted with the virus. “We cultivate 25 sacks of rice per cycle, which is enough to meet our organization's demands. The rest is handed to the villagers. On the organization's property, we're also planting veggies and fruit-bearing plants. The pandemic has been difficult for everyone, and we are grateful to be able to make a small difference through organic farming,” Indra told in an exclusive interview.

She frequently visits the farm, which is on the outskirts of the village, to keep an eye on the progress. Indra is like a mother to 30 or so disabled girls, but few people are aware of her remarkable story.

When Indra was five months old, she was diagnosed with polio, which left her with a 90% disability. Her parents moved her to a Children's organisation with the hope that she might be able to walk again one day.

Indra learned to read and write here, despite having no official education. While other children were attracted to toys, Indra found comfort in literature. Her family, on the other hand, never encouraged her to pursue academic or career aspirations.

This went on until Brother Selvyn Roy entered the picture. When he met Indra, he was a professional psychologist who was volunteering at numerous shelter homes across India and Sri Lanka. Selvyn decided to launch his organisation, Prema Vasam, in 1999 to provide special education to children like Indra, after being inspired by the teen's enthusiasm and interest.

“Brother Selvyn had faith in me and tried to persuade my parents that I could succeed in a regular school. My parents, on the other hand, were adamant about protecting me from criticism and jokes. They were concerned for my safety, but I was carefree. He warned me that it would be difficult, but he also promised to be by my side,” Indra adds.

Many schools turned Indra down, either due to a lack of facilities for people with disabilities or because other students would be uncomfortable. Finally, she was accepted into a Class 8 school. “I'd spent the first ten to twelve years of my life in the organisation or at home, so I had no idea how our society worked or what was going on in the world”. She said.

I'd never worked with kids who weren't physically or mentally challenged before. I had to not only catch up on the curriculum at my new school but also had to adjust to being around other kids my age. Every day, I would complain and moan to Brother Selvyn at the end of the day. He, on the other hand, did not give up and but tried even harder to teach me. He'd even carry me to school,” D Indra recalls.

Eliminating her fear of failing was one of the things that helped Indra improve her grades. Selvyn informed her that failing several times was fine as long as she didn't give up.

Indra was fortunate in that when she shifted schools in Class 9, she was surrounded by helpful and pleasant classmates. Her class was even moved to the ground floor by the school administration. This significantly boosted her confidence and morale and she scored 420/500 marks in her SSLC board exams. She earned her bachelor's degree from St Joseph's College and her master's degree from Anna University. “College life was made easier by my classmates and teachers. They'd carry me from one lecture to the next. That's how I got lucky,” explains Indra. She not only received a distinction but also went on to earn a Master's degree in Computer Application as a result of her hard work and devotion.

Indra chose to work with Prem Illam as a means to give back despite receiving a job offer. She wanted to be to other children what Brother Selvyn was to her, so she became a leader in his organisation in 2017 and has worked there ever since. She said, “We look after 30 girls, five of whom attend school. The remaining students are educated at home. She continues, "I got a B.Ed degree in special education to aid the kids."

Selvyn, Indra's constant support system throughout, had nothing but praise for her. “Indra is hardworking, ambitious, and generous, giving,” he says. “She is devoted to the youngsters and it is it is heartening to see her give back to society.”