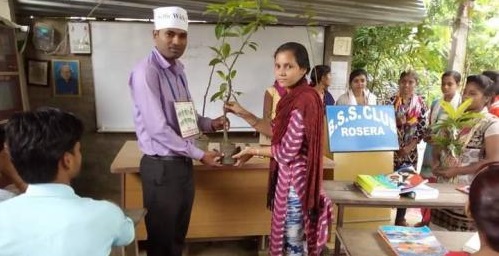 Education and environment, these two sectors need more attention than provided in India. During this monsoon, the country witnessed catastrophic floods, cloudbursts and landslides in various parts. Meanwhile, the fees of educational institutions such as schools, colleges and coaching centres touched new heights.
As the issues with education and the environment increase in India, a 38-year-old man from Bihar came up with an innovative idea.
Rajesh Kumar Suman runs a coaching centre named Green Pathshala that provides coaching for aspirants of various government services exams. The fee charged by the coaching centre is 18 saplings.
The Green Pathshala teaches aspirants for the civil service exam with the help of educated volunteers. The coaching centre is located in Rosara of Samastipur district.
Mr Kumar is also known as the Paudhabala Guruji and the Tree Man. He established this unique school under the Binod Smriti Study Club in remembrance of his late mama (mother's brother), who inspired him to serve the poor by providing education.
“Aspirants for various competitive examinations for government jobs are given free preparation coaching at Green-Pathshala during morning and evening sessions. There is a scientific logic for taking 18 saplings in exchange for fees," says Mr Rajesh.

"Throughout his or her life, one human inhales the same amount of oxygen that 18 plants produce. As a result, we impose costs of 18 saplings, which are then planted in various locations,” he explained.
When there is no coaching on Sundays, Rajesh goes on a tour throughout the state to encourage people to plant more trees.
“This Green-Pathshala has coached over 5,000 students for various competitive exams since 2008.” "13 students, three of whom are women, just cleared the Bihar police examination and are now sub-inspectors,” he said.
Female students make up over 40% of the students at the centre. More than 90,000 plants collected from students have been planted since the project began.
We salute Mr Rajesh Kumar Suman for coming with this innovative idea that solves two issues- environmental deterioration and high education fees at a time.