Matilda Kullu has dedicated her life to caring for 964 people in Baragaon tehsil of Odisha's Sundargarh district. 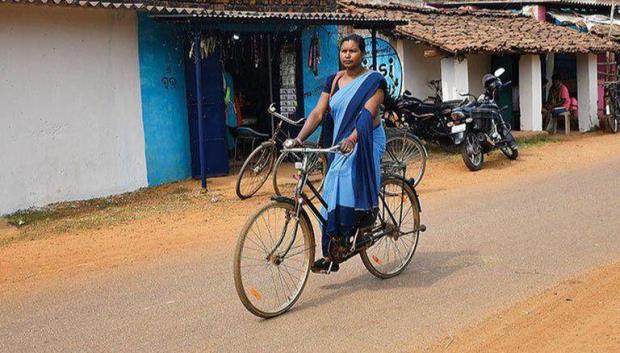 It was just like any other busy day for Matilda Kullu, an Accredited Social Health Activist (ASHA) worker from Sundargarh district in Odisha who was ignorant about the fact that she has been featured on the Forbes India W-Power 2021 list for the work she has done during the Coronavirus pandemic outbreak in Odisha.

45-year-old, Matilda Kullu, a tribal ASHA worker has been featured as the strongest woman by Forbes. The people in her village would resort to black magic to cure diseases rather than visiting a hospital.

Who is Matilda Kullu?

Matilda Kullu, who works in Gargadbahal village in Baragaon of Sundargarh district for the last 15 years has been actively involved in bringing the modern healthcare system closer to the rural village of Gargadbahal and its people. The local hero has been showered with applause and praises from different parts of the country for her outstanding achievement.

However, it was not an easy path for her when she started work.

The social activist has devoted her entire life to caring for 964 people in Baragaon tehsil. She has been listed third in the Forbes India W-Power 2021 list. Kullu is the village’s Covid warrior, who has done enormous work in the healthcare sector even though she only earned  Rs 4,500 a month.

Forbes website mentions this ASHA worker’s motto to be proud of saving many people’s lives.


“People did not think of going to the hospital when they fell sick. When I used to advise people to go to hospital, they used to ridicule me. I also had to bear the brunt of casteism,” said Kullu.


“It took years of work before I could make people understand the need to visit doctors instead of rushing to the local witchdoctor.”


Forbes further notes that Kullu has come a long way in making the villagers understand the importance of good medical healthcare. She has persuaded villagers who are mostly tribals to visit doctors and hospitals. Other than ensuring proper medical courses for those who are ill, Kullu has also fought casteism and untouchability in her village during door-to-door visits as she comes from a Scheduled Tribe group.


Amongst the 47,000-odd ASHA workers in Odisha, Matilda’s is quite full on her plate with a daily workload that contains doorstep visits for vaccinating newborns and adolescent girls, antenatal check-up, post-natal check-up, counselling of women on birth preparedness, breastfeeding and complementary feeding, and prevention of common infections, including reproductive tract and sexually transmitted infections.

Speaking about the hardships she faced during the initial days of her work, Kullu noted how difficult it was in the past.

“It was really bad some years ago, things are much better now. People have become more understanding and less superstitious. The old generation still practises untouchability but that doesn’t bother me anymore”, said Kullu as she spoke to Forbes.

Kullu’s day begins at five in the morning, as she finishes household chores, makes lunch for her family of four and feeds the cattle before leaving home on her cycle for doorsteps visits. After the pandemic hit the county, Matilda’s schedule became busier as she had to visit around 50 to 60 households daily to check on the people suspected of having Covid symptoms.

“Every day I would get out of home and visit families looking for Covid suspects and then inform the local primary health centre. People were scared of being taken for tests as there was a lot of stigmas attached to a Covid patient last year,” Matilda said.

Despite the job requiring her to meet potentially infected people in their homes, the majority of ASHA workers were not provided with face masks, gloves and sanitisers. As soon as the first wave receded and inoculation began in the country, there was another new challenge for Matilda - where she had to convince the villagers to get vaccinated and make them understand why taking the vaccine will save them from Covid-19.

“As I have been working with people in my village for a long time, they listened to me and got vaccinated,” said Matilda, as she laments that despite all the hard work she does for the people, she is only earning as little as ₹4,500.

“During the pandemic, the state government had given a one-time incentive of ₹2,000. But now that has been withdrawn, and we get just ₹4,500,” she added.