In its initial days, Google Pay amped up its installation and downloads by offering multiple scratch cards which actually gave its users financial benefits 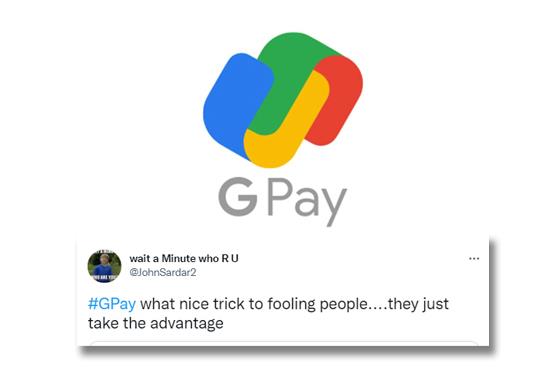 Leading Unified Payments Interface (UPI) application Google Pay has been facing a lot of flak on Twitter. Google Pay or Gpay is a mobile payment service developed by Google to power in-app, online, and in-person contactless purchases on mobile devices, enabling users to make payments with Android phones, or tablets. It is widely used in India on daily basis. In its initial days, Google Pay amped up its installation and downloads by offering multiple scratch cards which actually gave its users financial benefits from time to time. Now, the question arises, why #Gpay is trending on Twitter and why netizens have been slamming its services?

The answer lies in the change of approach of Google Pay. As mentioned above, #Gpay used to give financial benefits including cash transfers directly into its user's account. However, in the past few months, Gpay has gone on a totally different path as it has introduced scratch cards but giving benefits such as discounts which according to netizens hardly used by them.

See what Netizens have to say on Gpay

"Useless so called rewards by #Gpay" added another user.

Le me sadly scrolling through expired GPay rewards which literally no one wants to redeem ever:#GPay #T20WorldCupFinal #RRR2 pic.twitter.com/1wYtbHPpSj

Four apps — PhonePe, Google Pay, Paytm, and CRED Pay — command 96.4 percent of the overall UPI market. PhonePe had the highest share in total UPI transactions in India with 49 percent pie in October, according to data from the National Payments Corporation of India (UPI). PhonePe was followed by Google Pay with 34 per cent share, Paytm (11 per cent), CRED Pay (1.8 per cent) and others (WhatsApp, Amazon Pay and banking apps) with 3.5 per cent share.