On Friday Finance Minister Nirmala Sitharaman said that this is not the right time to bring petrol and diesel under GST. 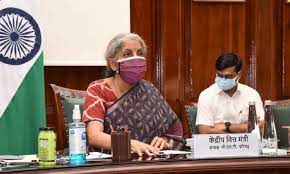 The 45th GST Council meeting was the first in-person meeting in around 20 months, as the last such meeting was conducted in 2019 before restrictions were enforced due to the COVID-19 pandemic.

Here are some highlights of the meeting:

The GST Council on Friday approved a proposal to treat food delivery apps such as Zomato and Swiggy as restaurants and levy 5 percent GST on supplies made by them.

Such food delivery apps will now be required to collect 5 percent GST, or Goods and Services Tax, from consumers instead of the restaurant they pick up orders from, Finance Minister Nirmala Sitharaman said on Friday evening after the Council meeting.

Also Read: Swiggy, Zomato to collect 5% GST on deliveries, food not to get dearer

2.) Covid and other life-saving drugs:

The FM has extended concessional tax rates on COVID-19 medicines and has cut tax on cancer drugs and waived GST on the import of highly expensive medicines for muscular atrophy.

3.) GST on railway locomotives, parts and others increased by 18 percent.

4.) Transport of exported goods by vessel and air exemption from GST extended by one more year.

6.) The Ministry denied to bring Petroleum products under GST, said that this is not the right time to take this action.

7.) Skill development programs that are wholly funded by the government – state or central, would be exempted from GST.

8.) GST Council has made two Groups of Ministers – one would look at the rate of rationalization and the second would look into related issues of e-way bills, FASTags, technology, compliance, composition schemes.

9.) GST rate of biodiesel reduced to 5 percent from 12 percent.