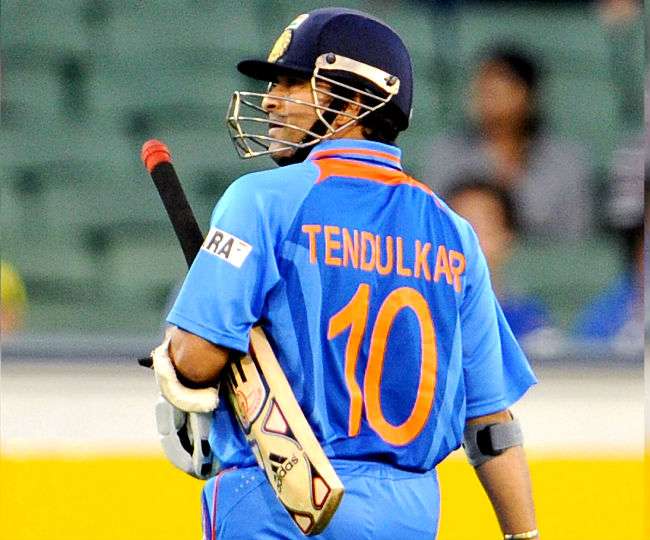 Sachin Tendulkar, dubbed "The God of Cricket," is arguably the greatest batsman to have ever played the game since its inception. Sachin Tendulkar, known for his stylish cricketing shots and impeccable timing, became the anthem of Indian cricket fans, resonating in stadiums for more than two decades.

In Indian cricket, ‘Master Blaster’ became a one-man army. He set numerous records that have lasted for centuries. In both forms of the game, the legendary Indian batsman played 200 Tests and 463 one-day internationals (ODIs), scoring 15,921 and 18,426 runs and reaching a total of 100 centuries.

As Tendulkar turns 48, we brought five of his best innings that he played in his career.


143 Runs against Australia at Sharjah in 1998:
Known as 'Desert Storm', Tendulkar scored 143 runs off 131 balls, including nine fours and five sixes. Despite the fact that Tendulkar was unable to win the match for India, his innings ensured that the Men in Blue advanced to the tournament finals.


98 Runs against Pakistan in 2003 World Cup:
Tendulkar once again demonstrated his greatness during the 2003 ODI World Cup, smashing a stroke-filled 98 off just 75 balls against Wasim Akram, Shoaib Akhtar, and Waqar Younis.


200 Runs against South Africa at Gwalior in 2010:
Tendulkar smashed the likes of Dale Steyn and Morne Morkel to score 200 not out off just 147 balls, helping India beat South Africa by 153 runs.


134 Runs against Australia at Sharjah in 1998:
Tendulkar delivered another masterclass in the finals of the Sharjah Cup two days after his 'Desert Storm' knock, smashing a 131-ball 134 to help India beat Australia by six wickets.

82 Runs against New Zealand at Auckland in 1994:Tendulkar delivered another masterclass in his first ODI game as an opener, smashing a stroke of 82 off just 49 balls, hitting 15 fours and two huge sixes to help India beat New Zealand by seven wickets.

We wish 'The God of Cricket' a very Happy Birthday.