With elections approaching, BJP is trying to lure Congress leaders with several promises. Meanwhile, Congress is having a tough time. 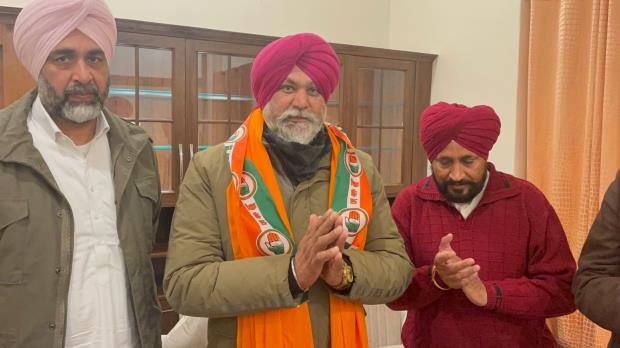 The BJP's newest state recruit from Congress has returned to the grand old party ahead of the Punjab elections in 2022. Balwinder Singh Laddi, a Congress MLA from Hargobindpur had switched to the BJP around six days ago after quitting leaving his former fold.
Mr Laddi re-joined the Congress on Sunday night in a small ceremony attended by Chief Minister Charanjit Channi, Punjab unit in-charge Harish Chaudhary and Deputy Chief Minister Sukhjinder Singh Randhawa.
On December 28, MLA Balwinder Singh Ladi along with MLA Fatehjung Singh Bajwa from Qadian in Gurdaspur was inducted into the saffron party. Mr Laddi's Twitter feed is still full of messages congratulating him on his decision to join the BJP. A few of these have also been retweeted by him.
However, giving shock to BJP, the MLA has returned to his old party. Earlier, Congress had indicated that Laddi might not get a ticket to contest upcoming elections. After which the leader switched parties.
Since the day Laddi joined BJP, Congress had been attempting to entice him back. The grand old party has promised the leader a ticket from his constituency, Hargobindpur.
Also Read: Will PM Modi’s Punjab visit be a watershed moment in state’s political spectrum?
A Congress leader has remarked that "it was an achievement for the party to get him back."
Punjab is likely to hold elections next month. With elections approaching, BJP is trying to lure Congress leaders with several promises. Meanwhile, Congress is having a tough time with infighting and top leaders switching to the rival party. The party, on the other hand, has refused to name its Chief Ministerial candidate before elections, causing a stir in Navjot Sidhu and Charanjit Channi camps.
BJP will contest Punjab elections in alliance with Capt Amarinder-led Punjab Lok Congress and Sukhdev Singh Dhindsa's SAD (Sanyukt). In the 2022 elections, BJP is gearing up to contest for around 70 seats out of 117, for the first time. Captain Amarinder’s party will contest for 30 seats and Dhindsa’s outfit for 17.