Will PM Modi’s Punjab visit be a watershed moment in state’s political spectrum?

Ahead of PM’s visit, three Congress MLAs have switched to BJP. According to sources, it is expected that in the coming days few more MLAs might leave the Congress party ahead of Punjab elections 2022. 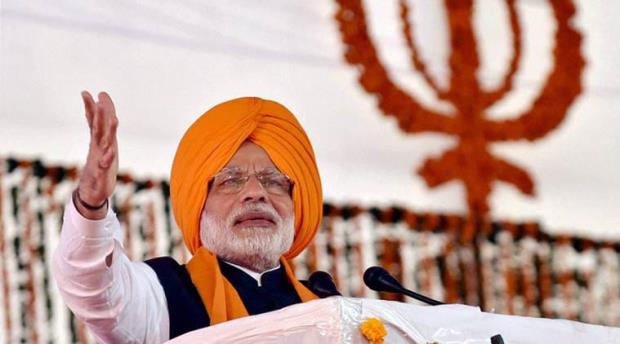 Prime Minister Narendra Modi is scheduled to visit the poll-bound state of Punjab on January 5. Mr Modi will travel to Ferozepur to lay the foundation stone for the PGI satellite centre. This would be his first visit to Punjab following the repeal of farm laws and ahead of the crucial state elections.
However, PM’s visit could be seen as a big threat for the ruling Congress and other state parties gearing up for upcoming elections. Ahead of PM’s visit, three Congress MLAs have shifted to the saffron party and more are speculated to make the change.
Mr Modi’s first visit before the state elections could emerge as a watershed moment in Punjab’s political landscape. Here’s how-
On Tuesday (December 28), Punjab Congress suffered a major setback as sitting party MLA Fatehjung Singh Bajwa and MLA Balwinder Singh Ladi joined BJP. Along with this, Cricketer Dinesh Mongia and former Akali MLA Gurtej Singh Ghudiana also joined the BJP with him.
Fatehjung Singh Bajwa who contest from Qadian in Gurdaspur and MLA Balwinder Singh Ladi from Shri Hargobindpur, both the MLAs left the party due to conflict between the party members.
Earlier, Rana Gurmit S Sodhi, MLA from Guru Har Sahai in Punjab joined BJP. Rana Gurmit Singh took this step as he was deeply hurt with bickering and in-fighting within the Punjab Congress.
Also Read: Has 'Common Man' of Jalandhar already made their mind for Punjab Elections 2022? Click to Know
According to sources, it is expected that in the coming days few more MLAs might leave the Congress party ahead of Punjab elections 2022. Former Punjab CM Captain Amarinder Singh’s close confidants who are still in Congress are likely to make a shift to BJP. Notable, BJP will contest Punjab elections in alliance with Capt Amarinder-led Punjab Lok Congress and Sukhdev Singh Dhindsa's SAD (Sanyukt).
Senior leaders from Doaba, Malwa and Majha regions are also expected to switch to the saffron party.
As per experts, it is anticipated that in order to appease disgruntled farmers and the Sikh population, PM Modi could address major issues of the community and make big announcements.
BJP and Punjab polls
Earlier, BJP used to contest Punjab elections in alliance with Shiromani Akali Dal (SAD), which broke ties with the saffron party following the introduction of controversial farm laws. In the 2022 elections, BJP is gearing up to contest for around 70 seats out of 117, for the first time. Captain Amarinder’s party will contest for 30 seats and Dhindsa’s outfit for 17.
The only time, BJP independently contested Punjab elections was in 1992 polls. After that, the saffron party allied with SAD, which remain intact for at least 23 years. In 2020, SAD parted ways from BJP, prompting it once again to contest independently in the state. However, Capt Amarinder’s dismissal from the power worked in favour of the BJP.
Now, BJP will contest the 2022 Punjab elections as a primary party, running in 70 constituencies.
Also Read: "AAP imposed night curfew in Delhi to postpone elections," Says CM Channi
PM’s first visit after Farmers protest
Prime Minister Narendra Modi will visit Punjab for the first time after the year-long farmers' protest. Since farm ordinances were announced and protests began on June 5, 2020, the Prime Minister has not visited the state.
Thousands of farmers were protesting against the three controversial farm laws passed by the Modi government in 2020. Farmers had staged a protest at the borders of national capital Delhi, making the BJP government finally bow. Call it an election stunt or BJP's masterstroke, PM Modi on the occasion of Gurupurab (on November 19) announced the repeal of laws.
On December 11, the farmers ended their dharna and returned to their homes.
On January 5, Prime Minister Narendra Modi will visit the election-bound state to lay the foundation stone of the PGI satellite centre in Ferozepur. The UPA administration announced the 450-crore project in 2013. The project, however, became a non-starter after the NDA came to power in 2014.
Modi will lay the foundation stone for a project that has been in the works for eight years. According to prior announcements by former Union health minister Dr Harsh Vardhan, the facility will have 400 beds.