Administrations and deputy commissioners are being organised to prepare strategies to withstand the floods as the Himachal will soon witness monsoon. 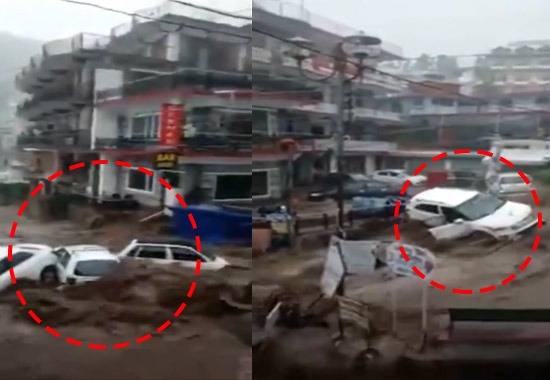 Monsoon has started coating every part of India, however, it was accompanied by a cloud burst incident in Himachal Pradesh on Monday, July 12. Many lives of residents in Bhagsunag were shattered after the cloudburst. The incident has led to an increase in the Bhaksunag waterfall which is causing fierce floods. Police, local authorities and SGRF teams have been deployed to tackle the situation and as several tourists are stuck in the place, rescue operations are underway.

One of the best tourist attractions of Himachal Pradesh - Bhaksunag has a waterfall and next to it are many hotels to accommodate the tourists who visit the region. Due to the cloud burst, several tourists are stuck in those hotels. The national highway near Jhakri in the Rampur area of Shimla district was shut off after the incident and water stormed the hotels, filling the roads.  The gushed water washed aways several cars from the streets.

An orange alert has been declared by the India Meteorological Department (IMD) in the Bhaksunag area, as the Himalayan state is expected to receive heavy rains in the coming days. The department has also issued alerts for the plains on heavy to very heavy rainfall and mid-hills on July 12 and 13 July and a yellow weather warning has been issued for July 14 and 15.

Tourists stuck in the area have been advised to stay in the hotel till the rescue team reaches them, while locals have been told to move to the plains region near Dharamshala.

Administrations and deputy commissioners are being organised to prepare strategies to withstand the floods as the Himachal will soon witness monsoon.

Cloudburst and rainfall have also triggered floods in regions of Jammu and Kashmir on Monday.

Sonam Lotus, Meteorological Department Director, said, “As expected, there were very heavy showers at many places in the plains of Jammu, whereas moderate rainfall was reported in many places in Kashmir, and continuous rain in hilly areas of Jammu".

"Present showers may generate flash floods and landslides in hilly areas, which may lead to blockage of roads," Lotus added.