'I made it alive to Bathinda': PM Modi tells officials to 'say thanks to Punjab CM'

Capt Amarinder taking swipe at ruling Congress said that Punjab CM and Home Minister “have no right to stay in office and should quit!” 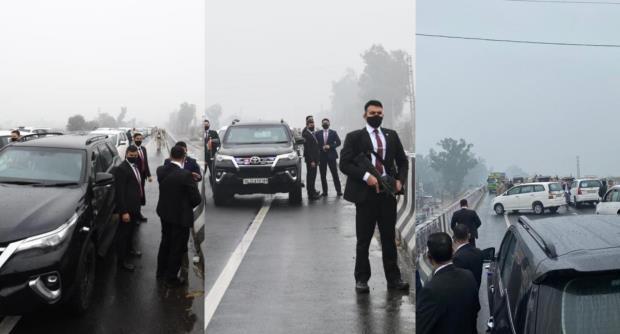 After cancelling the Ferozepur rally and returning back to Bathinda airport, Prime Minister Narendra Modi took a swipe at the Punjab government led by Congress. While talking to officials, PM Modi asked officials at the airport to "thank Chief Minister Charanjit Singh Channi on his behalf and that he was able to make it out alive."
"Thank your Chief Minister. I was able to make it alive to the airport," said PM, according to ANI.
Prime Minister Narendra Modi's rally in Punjab's Ferozepur was cancelled due to a “major security lapse” on Wednesday. This triggered a major row and BJP accused Congress of trying all tricks to disrupt PM Modi's programmes in the state as it fears defeat in upcoming elections.
BJP national president J.P. Nadda also claimed that Punjab CM Charanjit Channi refused to get on the phone to address the matter and alleged that state police were instructed to prevent people from attending PM's rally.
Capt Amarinder Singh who will contest upcoming elections in alliance with BJP tweeted, “Complete failure of law and order in Punjab, CM and HM Punjab, in particular. When you cannot provide smooth passage to the Prime Minister of the country and that too just 10km from the Pakistan border, you have no right to stay in office and should quit!”
However, Punjab Chief Minister Charanjit Singh Channi has refuted all the allegations and blamed it all on the “change of plans.”
Responding to the serious allegations by the Ministry of Home Affairs (MHA) and senior BJP leaders, CM Channi said, “There was no security lapse. The road plans for the Prime Minister were made at the last minute. He was scheduled to fly out in a helicopter. I stayed up late last night arranging security for his rally. The rally had 70,000 chairs set up, but barely 700 people showed up."
Here's what happened
Also Read: Row erupts as MHA claims PM skipped Ferozepur rally over ‘major security lapse’
On Wednesday, PM landed in Bathinda for a helicopter ride to the National Martyrs Memorial in Hussainiwala. PM waited around 20 minutes for the weather to clear out due to rain and poor visibility.
When the weather didn't improve, he decided to drive to the National Martyrs Memorial. MHA said in a statement that he proceeded to travel by road after receiving confirmation from the DGP Punjab Police of the requisite security arrangements.
But, around 30 km away from National Martyrs Memorial in Hussainiwala, when the PM’s convoy reached a flyover, it was found that the road was blocked by some protestors. Prime minister was stuck on a flyover for 15-20 minutes.
MHA went on to say, "This was a major lapse in PM's security” and the decision was made to return to Bathinda airport afterwards.
"The Punjab Government was informed well in advance of the PM's schedule and travel plans. As per procedure, they have to make necessary arrangements for logistics, security as well as keep a contingency plan ready. Also, in view of the contingency plan, Punjab Government has to deploy additional security to secure any movement by road, which were clearly not deployed," claimed MHA.
What next?
The Ministry of Home Affairs (MHA) is "taking cognisance of this serious security lapse" and has asked for a thorough report from the state government.
"State Government has also been asked to fix responsibility for this lapse and take strict action," MHA added.