As per MHA, PM Modi was stuck on a flyover for around 20 minutes because of protesters. 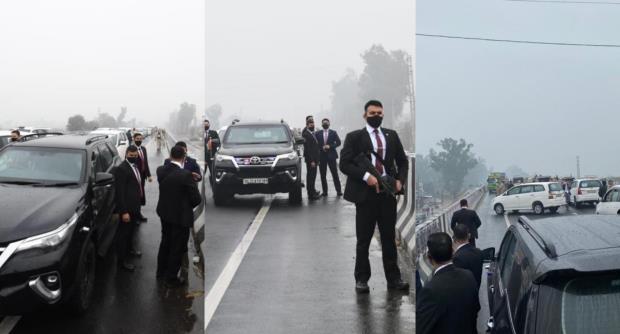 Prime Minister Narendra Modi's rally in Punjab's Ferozepur was cancelled today "due to some reasons," said Union Minister Mansukh Mandaviya on Wednesday. In what could be termed a "major security lapse," Mr Modi was reportedly stuck on a flyover for around 20 minutes because of protesters.
Mr Modi was set to lay the foundation stone for various multi-crore projects in Punjab and then address a rally at Ferozepur. However, PM was forced to return as farm protestors blocked the roads. The Ministry of Home Affairs (MHA) in a statement alleged that there was a "major lapse in the security of PM," and that it is "taking cognisance of this serious security lapse" and has asked for a thorough report from the state government. "State Government has also been asked to fix responsibility for this lapse and take strict action," MHA added.
As per MHA, 'around 30 km away from National Martyrs Memorial in Hussainiwala, when the PM’s convoy reached a flyover, it was found that the road was blocked by some protestors. Prime minister was stuck on a flyover for 15-20 minutes.'
MHA went on to say, "This was a major lapse in PM's security."
Also Read: As farmers block roads, PM Modi forced to cancel Ferozepur visit
PM landed in Bathinda this morning for a helicopter ride to the National Martyrs Memorial in Hussainiwala. PM waited around 20 minutes for the weather to clear out due to rain and poor visibility.
When the weather didn't improve, he decided to drive to the National Martyrs Memorial. MHA said in a statement that he proceeded to travel by road after receiving confirmation from the DGP Punjab Police of the requisite security arrangements.
"The Punjab Government was informed well in advance of the PM's schedule and travel plans. As per procedure, they have to make necessary arrangements for logistics, security as well as keep a contingency plan ready. Also, in view of the contingency plan, Punjab Government has to deploy additional security to secure any movement by road, which were clearly not deployed," added the ministry.
The decision was made to return to Bathinda airport after a security lapse, read the statement.
Meanwhile, BJP national president J.P. Nadda claimed that Punjab CM Charanjit Channi refused to get on the phone to address matter and alleged that state police were instructed to prevent people from attending PM's rally
The BJP leader further accused the Congress-led Punjab government of trying all tricks to disrupt PM Modi's programmes in the state as it fears defeat in upcoming elections.