Prime Minister Narendra Modi unfurled the national tricolor flag and addressed the nation from the ramparts of the Red Fort in New Delhi. 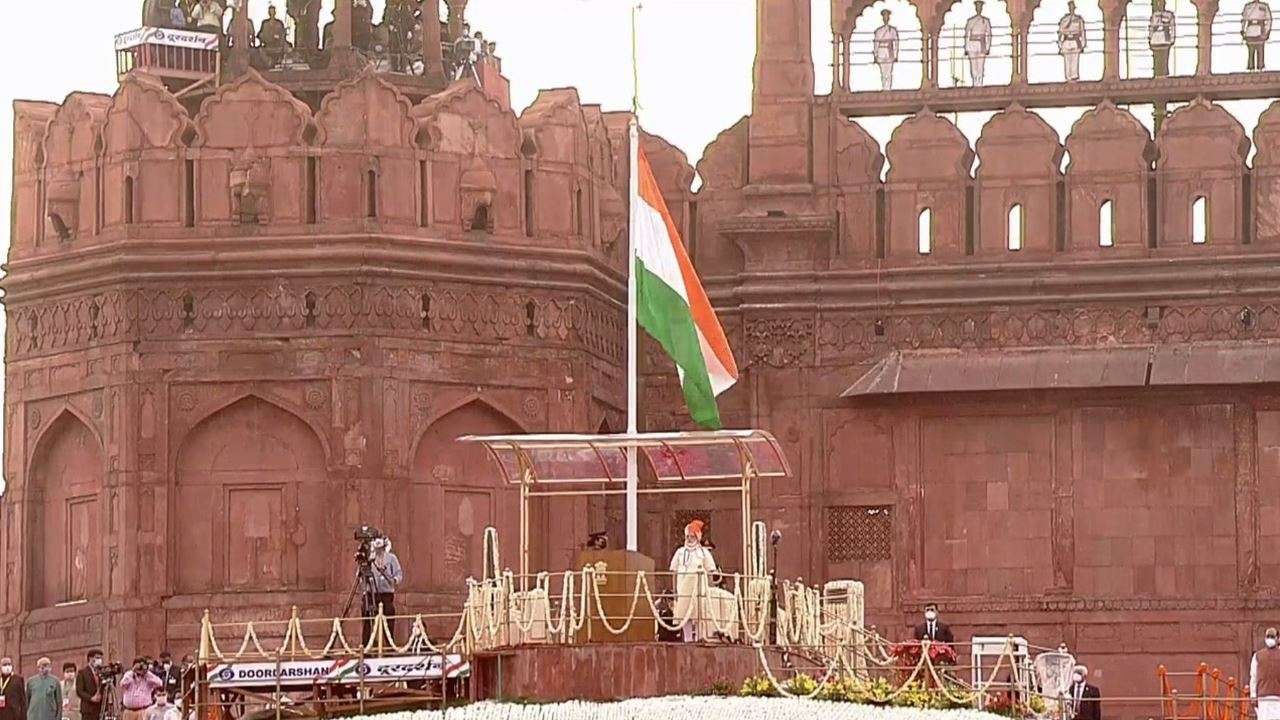 This year, Prime Minister gave a call for “Sabka Prayas (everyone’s effort)” and lauded the Olympians who represented the nation in Tokyo Olympics 2020. He extended his appreciation towards the doctors, nurses and medical staff who work tirelessly to save the nation during the time of the pandemic.

Also Read: Independence Day 2021: Quotes, wishes, and images you can send to your friends and family

Prime Minister Narendra Modi expressed the hope to build a country where there is minimum government interference. He also gave a call for “Sabka Saath Sabka Vikas,” for the building of a self-reliant nation.

Here are the top ten quotes from Prime Minister’s address:

1.) Prime Minister lauded the athletes who won medals during the Tokyo Olympics 2020. He said, “The athletes who have made us proud at Tokyo Olympics are here amongst us today. I urge the nation to applaud their achievement today. They have not only won our hearts but also inspired future generations. Olympians have brought glory to the nation, everyone must honor our sportsmen.”

2.) PM Modi further shared a blueprint for 100 years of Independence and said expressed the hope to build a country with minimum government interference. PM said, “Our aim is to build India where there is minimum government interference. We have to ensure we meet our goal of building Aatmanirbhar Bharat when we celebrate 100 years of India's Independence.”

3.) He later appreciated the efforts of doctors, nurses, medical staff and scientists. “Our doctors, nurses, paramedical staff, sanitation workers, scientists who were developing vaccines, during Covid-19, deserve our appreciation,” he said adding, “Indians have fought this battle (COVID) with a lot of patience. We had many challenges but we worked with extraordinary pace in every area. It's a result of the strength of our industrialists & scientists, that today India doesn't need to depend on any other nation for vaccines.”

5.) He further said about the current situation in Jammu and Kashmir. He said, “Development of J&K is visible on the ground. A Delimitation Commission has been constituted in Jammu and Kashmir and preparations are on for assembly elections in the future.”

6.) During the address, PM further highlighted the nation’s goal toward development. PM said, “Sabka Saath, Sabka Vikas, Sabka Vishwas and Sabka Prayaas' is very important for the achievement of all our goals.”

7.) Prime Minister further shared the achievement of schemes released by the government. PM Narendra Modi said, “Benefits of many schemes that started in the last 7 years have reached the doorsteps of crores of poor. From Ujjwala to Ayushman Bharat, the poor of the nation knows the strength of these schemes. Today, govt schemes have picked up pace & are reaching their goals.”

Also Read: Won’t tolerate any aggression, will teach Pak a lesson if it indulges in misadventure, vows Punjab CM

8.) PM Modi also announced that the government is planning to launch the Pradhan Mantri Gati Shakti master plan. He said, “The Rs 100 crore project will create jobs, new opportunities. The Gati Shakti project will break down silos, roadblocks in India's development path and would give the country's infrastructure and transport a holistic development.”

9.) He also mentioned farmers and said, “In the coming years, we will have to increase the collective power of the small farmers of the country. We have to give them new facilities. They must become the country's pride.”

10.) Prime Minister also highlighted the pain and suffering during the patrician and (once again) announced the Partition Horrors Remembrance Day. “We have taken a decision to observe August 14 as Partition Horrors Remembrance Day, to honor the pain and sufferings faced by the people of India during the partition,” said PM Narendra Modi.