Arshdeep Singh and Deepak Chahar made merry on a green pitch with deadly swing bowling to reduce South Africa to 9/5 in 2.3 overs, before Keshav Maharaj played a fighting knock of 41 to take South Africa to a below-par 106/8 against India in the T20I series opener at the Greenfield International Stadium on Wednesday Author : Rakesh Behal 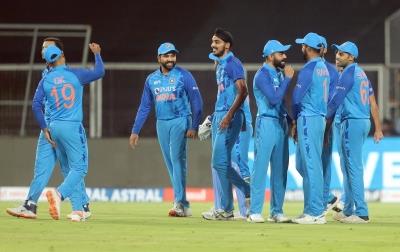 Arshdeep Singh and Deepak Chahar made merry on a green pitch with deadly swing bowling to reduce South Africa to 9/5 in 2.3 overs, before Keshav Maharaj played a fighting knock of 41 to take South Africa to a below-par 106/8 against India in the T20I series opener at the Greenfield International Stadium on Wednesday.

Arshdeep (3/32) and Chahar (2/24) justified Rohit Sharma's call to bowl first as they scythed through South Africa's top-order in picking five wickets on the first 15 balls of the innings. With movement in the air for the left-right pace bowling duo, South Africa batters were unable to move their feet well and fell like a deck of cards, with their scores resembling a binary code.

It took Maharaj's efforts with the bat, apart from 25 by Aiden Markram and 24 by Wayne Parnell for the visitors' to get past 100. Chahar began the carnage when he castled Temba Bavuma with an inswinger after bowling a couple of outswingers. In the next over, Arshdeep got one to swing a length ball away from Quinton de Kock, who just chopped on to his stumps.

Arshdeep then enticed Rilee Rossouw to drive at a full and swinging away delivery, giving a thick outer edge behind to wicketkeeper Rishabh Pant and fall for a golden duck. On the very next ball, Arshdeep got a fuller ball to come back in and shatter David Miller's stumps by hitting the top of middle stump.

Returning in the third over, Chahar made it three ducks in five balls for South Africa as Tristan Stubbs tried to cut a short and wide ball over point, but gave a simple catch to a diving Arshdeep at third man.

Amidst the decimation by Arshdeep and Chahar, Markram was leaning into drives through off-side, flicking and pulling over deep mid-wicket for a four and six respectively. His promising knock was cut short by Harshal Patel, with the pacer trapping him lbw in front of middle stump while shuffling across and shaping for a flick.

Parnell and Maharaj hit some boundaries in their 26-run stand for the seventh wicket, before the former holed out to long-off to become Axar Patel's first scalp of the match. Maharaj showed his cheekiness with the bat, reverse scooping Arshdeep for four and going even better with a slash over third man for six on the next ball.

He then hit his third boundary of the over with a well-timed drive wide of mid-off and helped South Africa reach 100-run mark, before being cleaned up by a slower ball from Harshal in the final over.