In his first T20I match at home, young left-arm pacer Arshdeep Singh picked up three wickets in his very first over of the T20I series opener against South Africa at the Greenfield International Stadium, displaying magnificent swing bowling to break the back of the visitors' batting. Author : Rakesh Behal 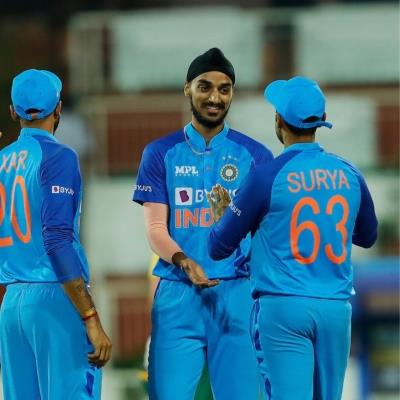 In his first T20I match at home, young left-arm pacer Arshdeep Singh picked up three wickets in his very first over of the T20I series opener against South Africa at the Greenfield International Stadium, displaying magnificent swing bowling to break the back of the visitors' batting.

After setting the base for India's eight-wicket win and giving them 1-0 lead in the three-match series, Arshdeep credited simplicity in plans and bowling in right areas to bamboozle South Africa on a two-paced pitch with green tinge.

"I had thought about what to say if I get the man of the match award and got a little excited (on being eager to come and talk). In the first over DC bhai (Deepak Chahar) set the tone and we knew there was plenty of help from the surface. The plan was to keep it simple and bowl in the right areas," said Arshdeep in the post-match presentation ceremony.

Arshdeep had missed the series against Australia to work on conditioning at NCA and admitted to being refreshed in outwitting the South Africa batters. Asked about the wickets he enjoyed from his spell of 3/32, he said, "I enjoyed (David) Miller's wicket as I thought he was expecting an outswinger but I bowled an inswinger instead (to get him out for duck)."

"The thought was to get his (Keshav Maharaj) wicket but he played well (hit three boundaries in his final over) and the plan could have been different. Hopefully I give such performances moving forward as well."

Arshdeep further came in for praise from opener and vice-captain K.L Rahul after the match ended. "He's (Arshdeep) growing with each game and with each outing he gets better, he is somebody who has a big heart and I have seen him in close quarters while playing in the IPL (for Punjab Kings when Rahul was there)."

"This season what he did for his franchise was phenomenal and to be the number one death bowler in a team which has Rabada speaks highly of him. We always want a left-arm seamer and it is great to have someone like Arshdeep."

Though it was a dominating win for India, the hosts' were made to work hard to chase down 107 on a tricky pitch. Rahul, who made 51 not out, was at 14 off 31 balls at one stage, and was kept quiet by a slew of outswingers and inswingers apart from surviving close lbw shouts off Wayne Parnell and Kagiso Rabada.

It was not until he opened up by flicking off his wrists over long-on for six off Anrich Nortje that Rahul found his groove and even got the winning runs for India with a slog-sweep over backward square leg off Tabraiz Shamsi, which also fetched him his fifty in 56 balls. He also shared an unbeaten 93-run stand with Suryakumar Yadav (50 not out), whose free-flowing shots gave India much-needed impetus in the chase.

"Definitely, right up there (as the toughest pitch he's played in a T20I). We have played in some difficult conditions like this but I haven't got runs, so this was hard work. It was unbelievable for Surya to come out there and play those shots, we have seen how balls were flying, nipping around, two-paced and everything that can be hard for a batter that was the wicket today."

"For Surya to come with that approach after the first ball that hit him, he just woke up and wanted to play his shots, be aggressive and take on the bowling. That helped me take my time and play one end."

Rahul signed off by saying he was prepared mentally to hang around and get India over the line. "We did practice here yesterday and that was a humbling experience as well, we all came in prepared mentally as it was not going to be an easy wicket and I was ready to do the dirty work, ready to be challenged and get the job done for the team."