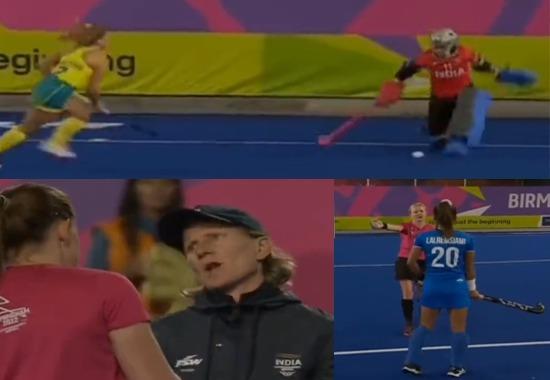 Indian woman's Hockey team on Friday suffered a heartbreaking defeat despite a valiant effort and their hopes to clinch a gold medal ended as hey lost the semi-final vs Australia 0-3 on penalty shootout. Following Ind vs Aus Hockey match, fans were filled with rage and even sensed 'cheating' and 'daylight robbery' and accused the International Hockey Federation of 'denying' gold to the Indian Women's Hockey Team.
For the unversed, India's woman hockey team went down in the penalty shoot-out. They fought valiantly, however, the momentum shifted to the Aussies after a referee made a technical error or you can say 'human error' and the goalkeeper Savita's effort went in vain. Notably, all the 3 Indian shooters missed their chances in the shootout, however, the referee's technical error cum human error was the one that demoralized the 'women in blue'.
India vs Australia Hockey CWG 2022 Cheating
India was unlucky as Australia's Malone missed her first attempt with a fine save from Indian captain and goalkeeper Savita. However, the officials gave the Aussie another go as the clock timer had not yet started. And she scored in the 2nd attempt while the other two Aussies too scored in the shoot out which eventually led to their win.
Also Read: CWG 2022 Harjinder Kaur: Struggle, biography, & the story of Chaff Cutter from Nabha, Punjab
Following the defeat, India coach Janneke Schopman commented on the shootout drama and asked why the Aussies were given extra chance despite of the fact they were not complaining at all? "I just don’t understand. Australia weren’t complaining… I don’t think even the ons didn't take the drama officials understood what happened… it’s not an excuse but that didn’t help us for sure," said India coach Janneke Schopman.
In fact, former Indian cricketer Virender Sehwag took to his Twitter handle and shared the video of the incident and called the decision 'biased'. "Penalty miss hua Australia se and the Umpire says, Sorry Clock start nahi hua. Such biasedness used to happen in cricket as well earlier till we became a superpower, Hockey mein bhi hum jald banenge and all clocks will start on time. Proud of our girls," wrote Sehwag.