Ind vs NZ: KL Rahul ruled out of first Test, Suryakumar replaces him in squad

Star India opener KL Rahul was on Tuesday ruled out of the two-Test series against New Zealand, scheduled to begin here from Thursday, due to a muscle strain in his left thigh. 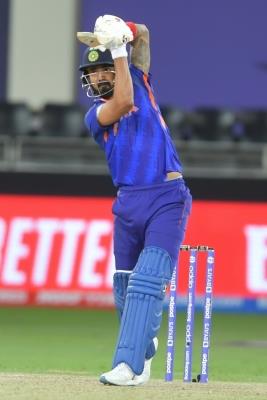 Star India opener KL Rahul was on Tuesday ruled out of the two-Test series against New Zealand, scheduled to begin here from Thursday, due to a muscle strain in his left thigh.

The 29-year-old will now undergo rehabilitation at the National Cricket Academy in Bengaluru and Suryakumar Yadav has been added to the India squad in his place.

"He (Rahul) will now undergo rehabilitation at NCA in preparation for the series against South Africa scheduled next month. The All-India Senior Selection Committee has named Mr Suryakumar Yadav as KL Rahul's replacement," the BCCI said in a statement.

Rahul regained his spot in the Test side recently in England where he formed a partnership at the top of the order alongside Rohit Sharma. Even though the workload of several senior players were managed during the ongoing home series against New Zealand, the attacking batter continued to be present in all squads. However, he wasn't in the playing XI on Sunday for the final T20I against New Zealand.

Suryakumar, who has been picked as his replacement for the New Zealand Tests, hasn't played for India in the red-ball format till now. He was a late addition to India's Test squad that had toured England earlier this year.

The 31-year-old middle-order batter has been a key player for Mumbai in the Ranji Trophy. In the most recent first-class season, in 2019-20, Suryakumar amassed 508 runs in ten innings at an average of 56.44 and strike rate of 95.13, with two hundreds and two fifties.

Notably, India will already be without Rohit Sharma and Virat Kohli for the opening Test with Ajinkya Rahane leading the side. Kohli will return to lead the side in the second Test in Mumbai that begins on December 3.