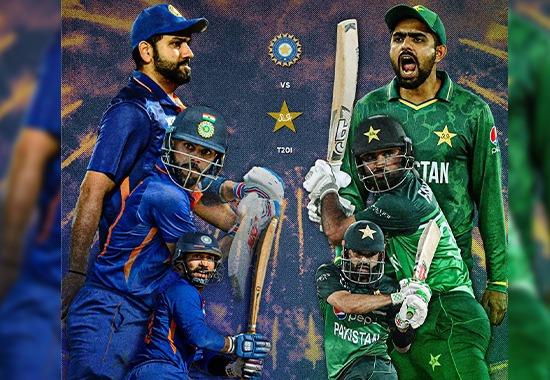 Halfway mark the iconic Indo-Pak encounter at the Asia Cup Pakistan posted a total of 68 with 6.8 runs per over after losing two wickets.

Rohit Sharma won the toss and invited his Pakistani counterpart to bat first in their opening encounter at the 2022 edition of the Asia Cup.

India lost its first review in a caught-behind appeal for the opener Mohammad Rizwan on the sixth delivery of Bhuvneshwar Kumar’s first over.

However, the veteran bowler’s short-length delivery was for India to get rid of Pakistani Skipper Babar Azam on the fourth delivery of the third over with an easy catch to Arshdeep Singh at the short fine leg.

The bouncer seemed a go-to plan for the Indian seamers as all four including Hardik Pandya were up and high troubling the Pakistani batters. Bouncer brought India its second and Avesh’s first wicket of the match to edge past Fakhar Zaman’s sneak edge that ended up safe in Dinesh Karthik’s gloves.

Pakistan managed to post 43 runs in the powerplay by losing 2 wickets on both short deliveries. Opener Mohammad Rizwan 29 not out at 31 making up the pace of Pakistani innings Iftikhar Ahmad batting at 16.