The fifth Test between India and England, which was supposed to start today, has been cancelled. 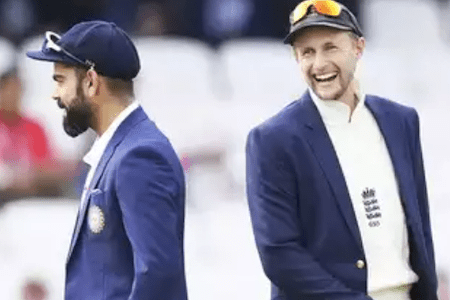 The fifth Test match between India and England, which was set to begin today, has been cancelled, according to the England and Wales Cricket Board. On Thursday, another member of Team India's support staff tested positive for Covid, causing uncertainty over the fifth and final Test match. However, on Thursday, all Indian players returned negative RT-PCR results, and it was assumed that the match would be played as planned, but it was not to be.

"Following active negotiations with the BCCI, the ECB can confirm that the fifth LV= Insurance Test between England and India Men, scheduled to begin today at Emirates Old Trafford," the ECB said in a statement to the media. 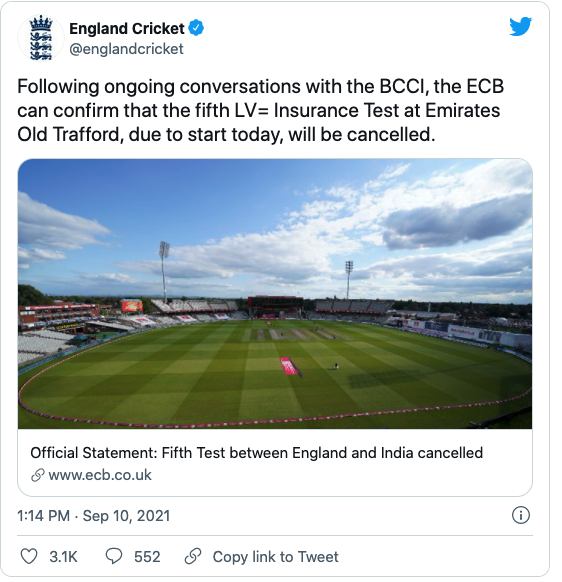 "India are regrettably unable to field a team due to fears of a further increase in the number of COVID cases inside the camp," the statement continued. Also Read: Approached Kohli for the ball as I wanted to create pressure: Bumrah

Delaying the Test even by 24 hours, would have jeopardised Phase-2 of the IPL. Franchises have been camping in the UAE for nearly three weeks and have a bubble ready to welcome players from the Indian team following the fifth Test.

Furthermore, the IPL's broadcast plans, finances, and advertising strategy for the season have already been planned out, and those following developments say, "it's too late to make any modifications to that programme."

The IPL cannot be postponed since it will clash with the ICC T20 World Cup in 2021, which will begin a few days after the IPL final.

As a result, even a single day's postponement of this fifth Test match would have a cascading set of consequences, putting a strain on many assets and plans in the works.

Returning to the Team India camp, two things have become very clear: A) Players do not want to risk Covid by participating in this Test when they are aware that there has been an active case around them for the past 48 hours; B) The BCCI administration is mixed on whether the Test should be cancelled or postponed.

Now that the Test has been postponed indefinitely, the BCCI can focus on the IPL, which will be followed by the T20 World Cup.

Well, in this series, India had taken a 2-1 lead in the five-match series after a crushing victory at The Oval, where they won by 157 runs.

India experienced a setback during the fourth Test when four members of their support staff tested positive for Covid, including head coach Ravi Shastri.

A member of the team reportedly tested positive on the eve of the fifth Test, prompting both teams to decide to cancel the match.

For the record, India will play three one-day internationals and three T20 internationals in England in July 2022. The Test is most likely to happen at that time.