Rachin played for 91 balls and Ejaz got 23 balls. 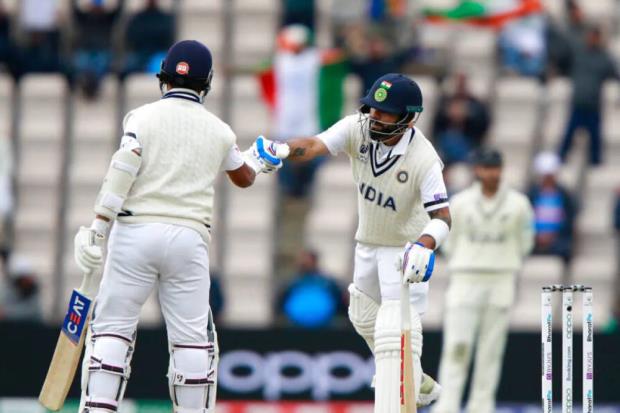 The first test match played in Kanpur ended on a very exciting note, however, no result was declared. The Kiwi team had a target of 284 runs and the team made a draw while putting a strong batting on the last day.

Debutants Rachin Ravindra and Ejaz Patel played a huge role in getting a draw for the match. Rachin played for 91 balls and Ejaz got 23 balls while saving a wicket. The duo faced a total of 52 balls for the last wicket.

Both Ejaz and Ravindra are natives of India. Rachin was born on 18 November 1999 in Wellington, New Zealand to parents Ravi Krishnamurthy and Deepa Krishnamurthy. Ravindra’s father is the founder of the Hut Hawks Club in New Zealand, who emigrated from India in the early 1990s. He previously lived in Bangalore. Ejaz was born in Mumbai in India but later his family shifted to New Zealand when he was only eight years old.

At 76th over which happens to be the last ball of the match, an LBW appeal was made against Tom Blundell, which was not approved by the umpire. Captain Rahane and Ashwin took a review and the replays showed that the ball was missing the leg-stump. Blundell remained not out. Ashwin then bowled Blundell (2) in the next over and gave Team India its 7th success. Ravindra Jadeja took Kyle Jamieson (5) wicket while New Zealand's 9th wicket was taken by Jadeja by dismissing Tim Southee (4).

T-break in the very first over was declared after Axar Patel LBW and Henry Nicholls (1) and gave the Kiwi team the 5th blow. Although Nicholls took the DRS, replays showed the ball hitting the middle-off stump and Henry was declared out. This was Kane Williamson's 150th Test innings and also completed his 800 fours in Test cricket.

Tom Latham with his outstanding batting completed 50 runs in 138 balls but lost his wicket only after a half-century. Latham at 52 runs was bowled by Ashwin, giving India the third success. With this wicket, R Ashwin also became the third bowler to take the most Test wickets for Team India, breaking Harbhajan Singh’s record of 417 balls. Ravindra Jadeja took NZ's fourth wicket. He dismissed Ross Taylor (2) LBW. The T-break was announced after Taylor's wicket.

This was Tom Latham's 22nd and seventh half-century against India, where he scored 50+ in both innings in a Test match for the third time. Interestingly, Ashwin bowled Tom Latham for the 7th time.

Latham and Williamson added 39 runs for the third wicket.

India’s Umesh Yadav made a comeback after lunch to give the country its second success by dismissing William Somerville (36) on the very first ball. Somerville added 76 runs in 194 balls for the second wicket with Tom Latham. Shubman Gill caught William's ball with a brilliant dive at deep fine leg. The catch was crucial for Team India to break this partnership to take the grip again in the match.

Meanwhile, Ishant Sharma got injured on the 5th day while delivering his first ball. Tom Latham stole a single off Ashwin towards fine leg during which Ishant Sharma got his finger injured as he was trying to stop the ball by diving.

Further, it was for the first time that a 280 run score was created on Indian soil as a score of over 100 has only been made twice. One was in 1987 when West Indies won the match by scoring 276 runs in Delhi and another was in 1972, when England scored 208 runs for 4 wickets in Delhi again and defeated India. New Zealand in the Kanpur match created a record score in the fourth innings, which was 45 years ago. The country had batted for 117 overs and scored 193 runs for 7 wickets in 1976.

During New Zealand's second innings, opener Will Young (2) was declared out in a strange circumstance. On the last ball of the second over, Ashwin appealed for LBW against Will and the umpire too without delay declared the Kiwi’s opener out. a replay or a replay was made by Young which clearly showed that the ball was leaving the leg stump, meaning Young was not out.

Team India in the fourth innings against England in the year 2008 had made 387 runs in the target of 98.3 overs. Sachin Tendulkar scored 103 not out which is called his best performance. At the same time, Gautam Gambhir made 66 runs, Virender Sehwag 83 and Yuvraj Singh 85 not out. India had set an enormous target for England at the loss of only four wickets.