Gangster Dilpreet was wanted for the murderous assault on well-known Punjabi singer Parmish Verma and demand of ransom from actor-singer Gippy Grewal. 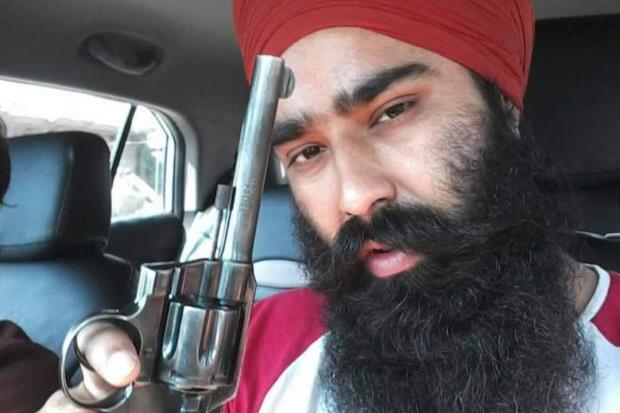 In a major development, infamous Punjabi gangster Dilpreet Baba attacked Central Reserve Police Force (CRPF) personnel inside high-security Central Jail in Bathinda. According to sources, the incident occurred a week ago, however, the information was revealed to the media on Friday.
Gangster Dilpreet, wanted for the murderous assault on well-known Punjabi singer Parmish Verma, brutally attacked the CRPF official with his security gears, last week. More information about the incident is yet to be known.
Dilpreet, a few years ago, had claimed that he had attacked Punjabi singer Parmish Verma. He also posted a photo of himself carrying a gun and another of Verma with a cross drawn it on Facebook. The gangster also demanded a ransom of Rs 10 Lakh from the singer.
He had also made an extortion call to Gippy Grewal, a well-known singer-actor. In addition, on April 9, 2018, he fatally shot a sarpanch in Chandigarh.
Who is Dilpreet Baba?
Hailing from Punjab’s Ropar, Dilpreet Baba have over 25 cases registered against him, with the majority of them related to murder, attempt to murder, extortion and the Arms Act.
He was shifted from Ropar Central Jail to the high-security Bathinda Central Jail in January 2020 due to security reasons.
Also Read: Ludhiana blast case: NIA team to question member of pro-Khalistani outfit in Germany
The Category-A gangster Dilpreet was arrested in a joint operation by the Chandigarh and Punjab police from ISBT, Sector 43, Chandigarh. The arrest was made after a brief gun battle with the police in July 2019. He, reportedly, surrendered when a police bullet hit him in the thigh while he was attempting to flee the scene after opening fire on the police squad.
Dilpreet had earlier escaped from the Punjab Police custody with the help of his fellow gangsters in July 2016, while being transferred from the Ropar jail to the Hoshiarpur jail in a drugs case.
Bathinda Central Jail
Bathinda jail is one of the state's high-security prisons. The jail received the deployment of a CRPF company in November 2019, in order to strengthen its security.
High-security jails, often known as maximum-security jails, are prisons with multi-layered security for dreaded criminals.