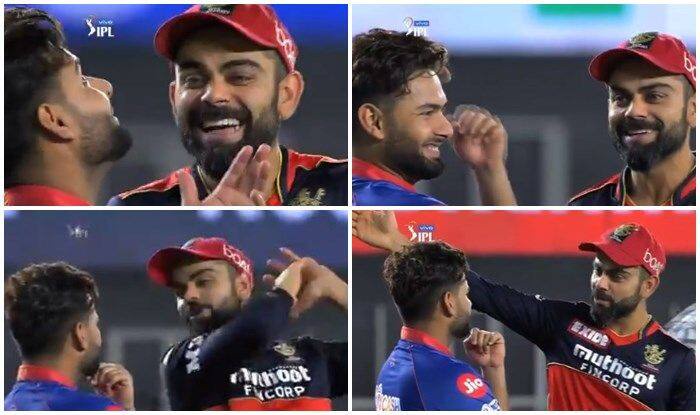 It's no secret that Virat Kohli and Rishabh Pant get along smoothly. After Royal Challengers Bangalore defeated Delhi Capitals by a run at the Narendra Modi Stadium in Ahmedabad on Tuesday, the love and bromance were on full display. They were both laughing and smiling as if there was no tomorrow. Fans who are dealing with the pandemic will appreciate this video.

Pant scored 58* off 48 balls, but his innings was in vain as he was unable to help his team cross the finish line in a nail-biting match.

Though Pant was disappointed following the defeat, Kohli, like a gentleman, stood by his side to comfort him. The scene in which Kohli praises and consoles Pant has also gone viral.

'Obviously feeling disappointed, specially when you are on the losing side. They got 10-15 runs extra on this wicket. Hetty (Hetmyer) played a brilliant innings, because of him we got close to the target. In the last over, we were thinking whoever gets the ball has to finish the job for the team. That's what we were planning, in the end we were one run short,' Pant said after his team lost match against RCB.

With the victory, RCB reclaims first place in the points table. Bangalore has played six games so far, winning five of them. As the tournament moves into the second half, they'd like to continue their good form. The Capitals, on the other hand, would like to get back on track after their defeat. They've won four of their last six games. Both teams are fighting for the games spot.