IPL 2022: It's great to see kids like Hrithik, Kartikeya coming through, says Jayawardene

Mumbai Indians head coach Mahela Jayawardene on Thursday said it has been great for the side to see young spinners like Hrithik Shokeen and Kumar Kartikeya Singh come through the ranks and do well in IPL 2022. 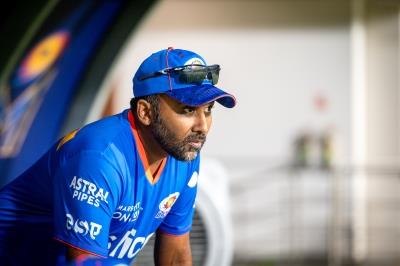 Mumbai Indians head coach Mahela Jayawardene on Thursday said it has been great for the side to see young spinners like Hrithik Shokeen and Kumar Kartikeya Singh come through the ranks and do well in IPL 2022. Both Hrithik and Kartikeya, who made his IPL debut at DY Patil Stadium after coming in as a replacement player, played an important role in stemming the run-flow of Rajasthan Royals in middle overs, thereby restricting them to 158. Hrithik returned with figures of 2/47 while Kartikeya bagged 1/19 in his four overs. In reply, Mumbai managed to chase down the total with four balls to spare, registering their first win of IPL 2022."Hrithik went for runs (when Jos Buttler hit him for four sixes) but the attitude he showed to come back (and take his wicket) was great. KK (Kumar Kartikeya) has been great, it's a great story. He's been with our support bowling group for four-five weeks working on his skills," said Jayawardene in the virtual press conference ahead of their match against table toppers Gujarat Titans on Friday."When we had the opportunity to bring him (Kartikeya) in, we knew that he had the skills, it was about understanding his temperament out there in the big stage, and he looked like a pro. It's great to see these kids coming through, and at the same time have that composure out there, against a very good batting line-up. He held his own and bowled brilliantly to execute the game-plan that he had, which he discussed with us," added Jayawardene.Jayawardene was also pleased with how Mumbai got the little things right against Rajasthan to get their first win on board. "It was good to see that we managed to execute skills and at the same time finish the game off. The bowling was pretty good� with the bat as well we were able to cross the line.""We had the same opportunities through this season with the ball and the bat too, to try and finish games off, which we were not able to. So, to get points on the table, cross the line, brings a very positive outlook to the entire group."With Mumbai now virtually out of contention for playoffs, Jayawardene wants his players to focus on becoming more confident, getting the execution right and win their remaining matches of the tournament. "We just need to win matches, play some good cricket. It's all about confidence. As players, as a group it's been tough for us, there's nothing to hide. We were not satisfied with our execution; we were not satisfied with the way we played.""But everyone stuck together and worked harder. I can't complain about the work ethic of the group. We've stayed together and believed in our ability. The rest of the season is going to be the same. Stick to our processes that we've always worked on, and make sure we win matches and go out and enjoy our cricket."
"Unfortunately, we had to wait for another four days before we could play another game. The focus has been good, we've had a couple of good chats. Looking forward to the next game (against Gujarat), which is a tough one. Probably the in-form best team in the competition, and looking forward to that."