According to Rachel White, an atmospheric scientist at the University of British Columbia, the storm's tremendous devastation is likely due to a combination of human-caused activities. 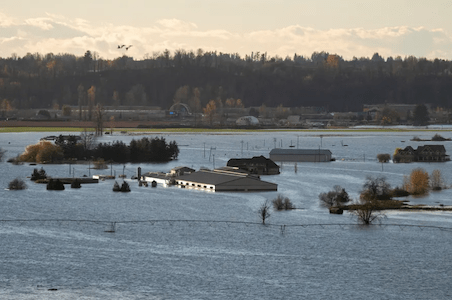 Premier John Horgan of British Columbia declared a state of emergency and issued a travel ban, telling reporters that "catastrophic" rains, winds, and flooding had "devastated entire communities across our province."

Canada is sending the military to aid evacuate and support communities hit by "catastrophic" floods, with the death toll anticipated to grow.
Also Read: Canada sees increasing daily Covid-19 cases in past days

After a "atmospheric river" dumped the region's monthly rainfall average in 24 hours, some 18,000 residents have yet to return to their homes. An "atmospheric river" is a lengthy strip of moisture in the air that transfers water from tropical areas to the poles.
Nearly 7,000 properties were still under mandatory evacuation orders as of Thursday, with over 2,500 more under evacuation advise.
After the storm swept across one of Canada's most agriculturally intensive areas, thousands of farm animals died and many more remain trapped by flood waters.
John Morgan said, “In the next days, we expect to confirm even more fatalities”.
The harsh weather this week follows record-breaking summer heat in British Columbia, which killed over 500 people and devastated a community, as well as wildfires that destroyed a town.


Residents struggled for food, heat, and water as the season's first snow flurries fell over inland villages buried in muck and partially flooded.
As a result of supply chain interruptions, many grocery shop shelves were empty.

"Thousands of animals have died," British Columbia Agriculture Minister Lana Popham said, adding that many more are in "terrible situations."
Vancouver is also totally cut off. A number of major highways are still closed. Rail traffic to and from Vancouver, one of Canada's major freight sea ports, was also disrupted by landslides.The situations are terrible.
Is this due to climate change?

Climate change has been blamed by officials in the region for the natural calamity.
Mr. Horgan stated that British Columbia must "bring the seven billion other souls on this earth to understand that we need to act now" in order to prevent future tragedies.
Although the influence of climate change on storm frequency is unknown, we do know that rising sea surface temperatures warm the air above, making more energy available to generate hurricanes, cyclones, and typhoons. As a result, with more extreme rainfall, they are likely to be more intense.
Since the beginning of the industrial age, the planet has warmed by around 1.2 degrees Celsius, and temperatures will continue to rise unless governments throughout the world take action.
According to Rachel White, an atmospheric scientist at the University of British Columbia, the storm's tremendous devastation is likely due to a combination of human-caused activities.
"As the climate warms, severe rainfall events like these will become more intense," she warned.
"As we warm up the atmosphere, as we warm up the oceans - more water is evaporated from the oceans.  When we experience these atmospheric river occurrences, the atmosphere may effectively convey additional water towards our mountains." Rain forms as a result of this condensation.
The severe weather in Canada comes only days after world leaders gathered in Glasgow for the COP26 climate conference.
In the same location, British Columbia, a record-breaking heat wave killed more than 500 people and caused wildfires, one of which burned the community of Lytton.


This disaster has been a really big eye opener for us. If we do not act now, soon the earth and the living beings will face disastrous circumstances.