Kangana Ranaut had made defamatory remarks on national and international television, according to Javed Akhtar. 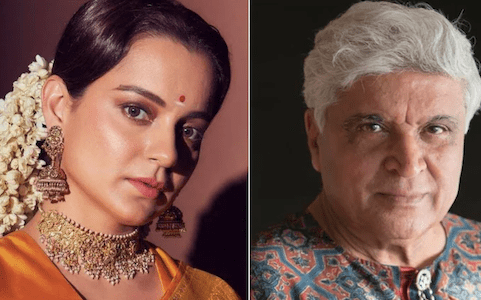 The Bombay High Court on Thursday denied Kangana Ranaut's appeal for the quashing of criminal defamation proceedings brought against her by a Magistrate Court in 2020 after lyricist Javed Akhtar filed a complaint.

The decision was pronounced by Justice Revati Mohite Dere.

Kangana Ranaut had made defamatory comments on national and international television, according to Akhtar's lawsuit,  “in what appears to be a clear campaign to malign and tarnish (Akhtar) in the eyes of the general public”.
Ranaut appeared in court in February after the Magistrate Court in Andheri initiated proceedings against her in February and issued a bailable warrant in March, and she was given bail.

Ranaut filed a case at the High Court in July this year, challenging the magistrate's whole process, including all orders and summonses issued to date. It said that the magistrate, rather than just instructing the Juhu police to start an investigation, was required by the Criminal Procedure Code to question Akhtar and the witnesses mentioned in the complaint (CrPC).
Also Read: Kangana to experiment with 10 different looks in Dhaakad; film in post-production stage
Ranaut's lawyer, Rizwan Siddiquee, claimed that instead of giving the order "mechanically," the magistrate should have evaluated the truth of the accusation. He said that Akhtar did not provide any evidence, and that the material relied on was provided by a third party who was not examined on oath.

The magistrate had exercised powers under the CrPC "without application of mind" and had unnecessarily asked the police to conduct an investigation for him by delegating powers to them, according to Siddiquee.
However, Javed Akhtar's lawyer, Jay Bharadwaj, opposed the petition, claiming that the magistrate followed proper procedure. He said that he called all of the parties involved in order to conduct an unbiased investigation, but Ranaut declined to appear.
In response, Akhtar submitted an affidavit seeking rejection of the plea, claiming that it was made with the “sole intent to delay the proceedings.”