Javed Akhtar In Trouble, BJP MLA Said ‘Won't Allow Screening Of His Films Till He Apologises’

The remarks come a day after Javed Akhtar drew a parallel between the Taliban and "those who seek a Hindu Rashtra" during an interview with NDTV. 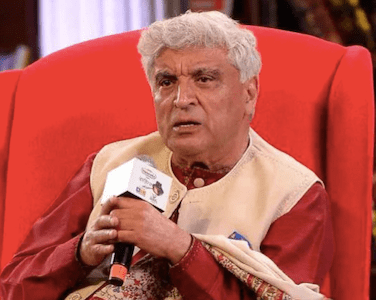 New Delhi: According to Maharashtra MLA and BJP spokesman Ram Kadam, no film involving writer-lyricist Javed Akhtar would be permitted to be screened in the country until he apologises to Rashtriya Swayamsevak Sangh (RSS) officials for linking them to the Taliban.

The comments came a day after the poet-lyricist drew a similarity between the Taliban and "those who seek a Hindu Rashtra" during an interview with NDTV. The RSS, the BJP's ideological parent, has long held that India is a 'Hindu Rashtra'.

"This remark by Javed Akhtar is not only disgusting, but also hurtful and embarrassing for crores of Sangh and Vishva Hindu Parishad workers, as well as crores of people throughout the world who follow their ideology," Mr Kadam added in a video message he also uploaded on Twitter.
Also Read: Javed Akhtar sparks controversy after he likens RSS, VHP, Bajrang Dal to Taliban
He went on to say that the poet-lyricist has insulted these organisations' officials, who assist the poorest of the poor.


"Before making these statements, he should have considered that individuals with similar ideologies are now in charge of the government and are carrying out raj dharma. Would he have been allowed to make these statements if the ideology was Talibani? This demonstrates how hollow his statements are "According to the BJP's spokesman.

Mr Kadam, the MLA for Ghatkopar West, stated, "We will not allow any of his films to be shown in our land of Ma Bharti till he apologises with folded hands to the Sangh functionaries who have given their life to the nation."

Mr. Akhtar is the father of filmmaker Zoya Akhtar and actor and filmmaker Farhan Akhtar, as well as the husband of acclaimed actress Shabana Azmi. He is also a former MP.

He told NDTV yesterday that right-wing all across the world want the same things. "There are people who desire a Hindu Rashtra, much as the Taliban want an Islamic State. These individuals share the same mentality, whether they are Muslims, Christians, Jews, or Hindus "he stated.

Of course, the Taliban is barbaric, and their actions are reprehensible, but those supporting the RSS, VHP, and Bajrang Dal are all the same.”

In response to a question on certain Muslim leaders' statements praising the Taliban's return to Afghanistan, Mr Akhtar replied, "these people represent a tiny proportion of the Muslim community of our country."

"The majority of Muslims I spoke with were shocked and outraged by some of the remarks expressed. Most young Muslims in India now desire a good job and for their children to have a good education in excellent institutions. However, some people wish to believe in this sort of regressive thinking, where men and women are separated and a regressive attitude is fostered. But, as I already stated, these individuals are a handful, so say what they want; they will not get it "he stated.

Mr. Akhtar went on to say, "I have complete trust in the basic sensibility of an average Indian.   The vast majority of the people in this country are incredibly good and tolerant. That has to be taken into consideration. India would never become a Taliban country."