Justice for Sabiya: The incident that shook the nation

People are out on the streets and all over social media, questioning the judicial system and every other organization responsible for asserting action. 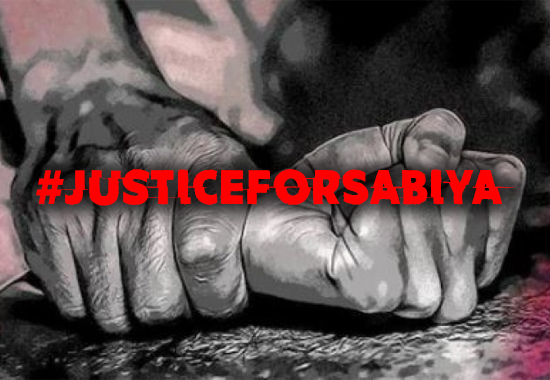 TRIGGER WARNING - The graphic description of the incident contains sexual assault and physical violence.
On the evening of August 27, Sabiya Saifi ( name changed ) who worked in Faridabad did not return home. Concerned parents approached the collector but sadly did not get any help.

Sabiya’s father went to every possible location to look for her including her workplace and friend’s houses. After her body was discovered the next day, the reports said that she had been brutally stabbed to death.

The 21-year-old Civil Defense employee was reportedly abducted on her way home, raped and then brutally murdered. A man named Mohammed Nizamuddin confessed to the crime of murdering the 21-year-old and claimed that the two were married, although on being asked, he could not present any proof.

On being interviewed, Sabiya’s father’s statement was gut-wrenching and left the internet outraged. He mentioned that while he and his wife were preparing the body for burial he noticed that she had bruises all over her body and that her neck, chest and hands had marks of multiple stabs.

He also added that there were no places to be seen on her body where there were no marks of stabs. On 29th Sabiya’s father called the police station and asked for the FIR and the post-mortem reports, in response he was told to go home and that he would be contacted by the police.

While narrating the condition of his daughter’s body he mentioned that it could not have been done by one man as there were multiple stabs on her body including cheek, neck, back and stomach. On the 7th of September, the case was transferred to the Crime Branch for the investigation to go further.

Although the father has claimed that his daughter was raped before she was murdered, the postmortem reports have come back clearly stating that sexual assault or mutilation was not done to the body.

The report has mentioned that death was due to shock and haemorrhage caused because of injury to multiple organs. On the 8th of September, the police have granted the custody of the accused of applying for a production warrant.

The case has certain factors that have outraged the people on the internet and people protesting for justice, like the condition of the body, the person claiming to be married to Sabiya, the postmortem report which claimed no sexual assault and the media not giving the case enough attention.