US officials confirm 13 US service members were killed and 18 military men have suffered injuries. 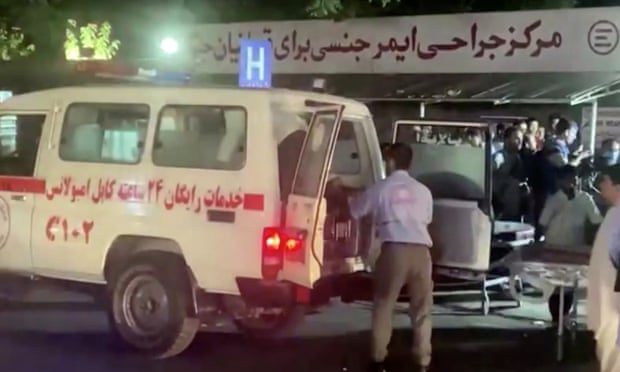 The outer gates of the Kabul airport were burned down by ISIS in a suicide bomb attack on Thursday night. The Kabul airport has been crowded since people in a haste want to flee the Taliban rule.
The suicide bomb attack killed several civilians and around 13 US troops. The attack has disrupted the airlift of thousands of Afghans who want to escape the brutality of the Taliban.
Hours after the twin explosions, a third blast was reported, however, there may have been more blasts, the media reports claimed.
The blast killed 60 Afghan citizens.
A video shot by Afghan journalists showed several dead bodies scattered around the canal on the borders of the airport.
Witnesses said at least two blasts hit the area.
ISIS taking the responsibility for the blasts on itself said one of its suicide bombers  "translators and collaborators with the American army".
The United States officials have also made the group liable for the attacks.

13 US troops casualties were reported on Thursday.

The US forces were the targets who are working around the clock to withdraw from Afghanistan after 20 years, for which the deadline has been August 31. The US invaded the war-torn nation in 2001, to remove the Al Qaeda militants and prevent another similar attack of September 11 on the US.
President Joe Biden has pledged to go after the perpetrators of Thursday's bombing and has directed the Pentagon to plan on how to storm ISIS-K, the affiliated branch that claimed responsibility for the blasts.
"We will not forgive. We will not forget. We will hunt you down and make you pay," Biden said.
A heart-wrenching video showed corpses lying in the canal, some being netted out and laid in heaps while weeping ones searching for their loved ones.
"For a moment I thought my eardrums were blasted and I lost my sense of hearing. I saw bodies and body parts flying in the air like a tornado blowing plastic bags. I saw bodies, body parts, elders and injured men, women and children scattered," explains an Afghan who had been trying to get into the Kabul airport.
"That little water flowing in the sewage canal had turned into blood."

Also read: American soldiers were on target in the Kabul blast, even Biden's threat could not stop the attack

The collapse of the Afghan government and no resistance from the Afghan army gave a clear path to the Taliban in regaining the nation.

Earlier, this week the US and its allies had warned its citizens and other people crowding at the Kabul airport to vacate the area and take shelter at some safe place. Meanwhile, Canada and a few European countries have called an end to their evacuations.