During his visit, Haasan met with his North American supporters on November 15 in Chicago, where they briefed him on their current projects and future plans. 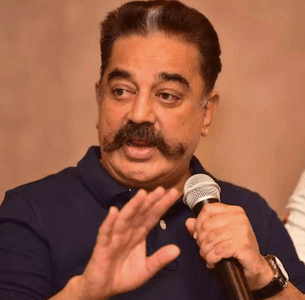 Kamal Haasan, the president of Makkal Needhi Maiam and an actor, said on Monday that he had tested positive with COVID-19 and had been hospitalised.

On Monday, November 22, actor-politician Kamal Haasan announced on Twitter that he had tested positive for coronavirus. He revealed on Twitter that he developed a cough after returning from the United States and had been examined.
Also Read: Bigg Boss 15: Is Simba Nagpal finally out of Salman Khan's show
"I had mild cough following my return from the USA. When I tested, the coronavirus infection was confirmed. I have isolated myself in hospital. Everyone should be on guard realising that the COVID-19 spread has not faded," Haasan said in a tweet.He urged people to be cautious and safe, noting that the pandemic is still present.
During his visit, Haasan met with his North American supporters on November 15 in Chicago, where they briefed him on their current projects and future plans.
Despite being in a different nation for business, the MNM chairman commended them on their support for their motherland. Haasan arrived home a few days ago. Prior to his overseas trip, the MNM leader toured flood-affected areas in the country and provided relief aid on behalf of his party.
The 67-year-old actor-politician, who celebrated his birthday on November 7, is still active in film and television production. The creators of his next flick Vikram had released the first look at the film during the occasion. Vikram, directed by Lokesh Kanagaraaj and starring Vijay Sethupathi and prominent Malayalam actor Fahadh Faasil, is Kamal's 232nd film.
The actor has been working on a number of projects. He is presently presenting the fifth season of Bigg Boss Tamil, a famous reality show. He has just revealed that his new brand, KH House of Khaddar, will enter the fashion market. On November 15, he held a special event in Chicago to introduce a new line from the brand to members of the media as well as a few selected guests, which is why the actor travelled there before confirming that he had tested positive for the coronavirus. The brand's goal, according to reports, is to promote khadi, and it also has a signature fragrance.