The battle was fought for around three months and on July 26, 1999, India got the victory, bringing “Operation Vijay” to a triumphant conclusion. 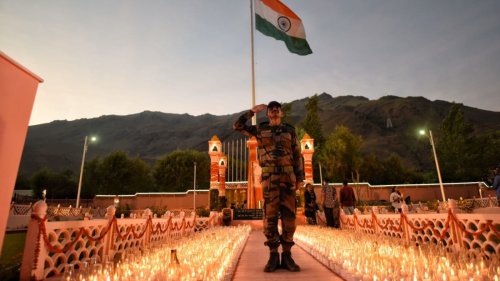 Every year Kargil Vijay Diwas is celebrated on July 26 to mark the anniversary of the Indian Army’s victory against Pakistan in 1999. On the 26th of July, the Indian Army had retaken the peaks and the tricolor atop was hosted at the high altitudes.

During the war, India lost a total of 527 soldiers, 1,363 were wounded. On this day, India remembers its fallen heroes, for whom the nation came first. The epic battles on the high-altitudes were recalled on Sunday and in a tribute to martyrs 559 lamps were lit at the Kargil War Memorial in Drass. During the tribute ceremony, high army officials, family members of the army officers were present.

Celebrations would take place at the Kargil sector and it is expected that, President Ram Nath Kovind would visit Drass to pay homage at the Kargil War Memorial, which is located at the foothills of Tololing.

On this day, every year, Prime Minister Narendra Modi pays tribute to the armed forces at the ‘Eternal Flame,’ ‘Amar Jawan Jyoti’ located at the India Gate, New Delhi.

Jammu and Kashmir’s Udhampur witnessed a solemn ceremony to sound the bugle of celebrations of victory in the Kargil War.

This year, India would mark the 22nd anniversary of Kargil Vijay Diwas midst of coronavirus due to which during the celebrations, across the country, all Covid-19 protocols were followed.

The next step was for India to detect the infiltration and mobilize soldiers to respond to it.