Aam Aadmi Party has begun preparations for Punjab Assembly Election 2022 and Kejriwal is currently on a tour of the state. 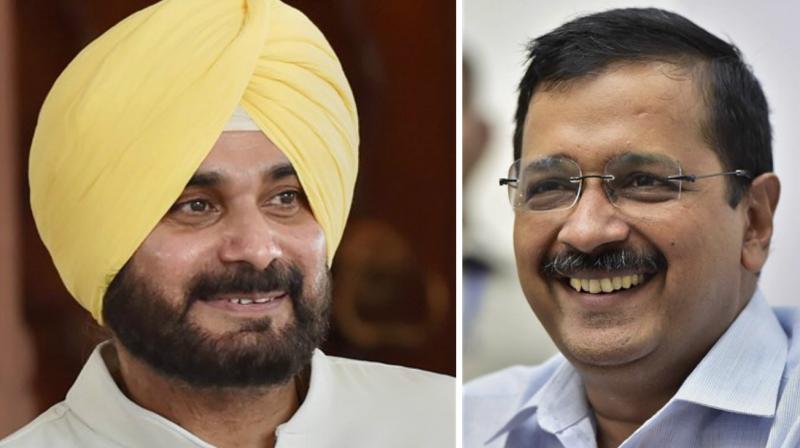 Amid escalating crisis in Congress’ Punjab unit, national convener of Aam Aadmi Party (AAP) and Delhi Chief Minister Arvind Kejriwal backed Navjot Singh Sidhu over his allegations. Kejriwal advised new Punjab CM Charanjit Singh Channi to remove the tainted officials from his government.
“I congratulate Channi Sahab on his election as Chief Minister. I'd like to advise him that he is alleged of inducting tainted ministers into his cabinet and elevating tainted officers. I'd request him to sack them and take necessary actions,” said Kejriwal.
The Aam Aadmi Party has begun preparations for the Punjab Assembly Election 2022. Delhi CM Kejriwal is currently on a tour of the state.
In the midst of political turmoil in the state, Kejriwal took a dig at Congress and said "political instability in Punjab is sad and a dirty fight for power is going on.” He remarked, "they've turned the government into a mess. Only the Aam Aadmi Party (AAP) can now give Punjab a stable administration."
"We've consistently stated that we'll give you a CM face that will make all of you proud.”
Also Read: Calling Sidhu 'head of family', CM Channi urges him to resolve issues
Kejriwal also advised CM Channi of taking action on Bargari incident.
“Punjabis are upset over the Bargari (sacrilege) case. So far, the case's mastermind is walking free. Kunwar Vijay Pratap Singh's report contains the names, which Channi Sahab should read. They can be arrested in less than 24 hours,” he added.
Further, Kejriwal asked Channi to "fulfil the promises of the Capt, otherwise say that he made false promises. Give unemployment allowance to the unemployed and waive the loans of farmers." Besides this, "cancel the power purchase agreement," said AAP leader adding, "Channi can also do the work that I did in Delhi in 49 days."