Kerala couple braves flood in a cooking vessel to get hitched

Following the recent heavy downpours that have pounded the state, Akash and Aishwarya from Alappuzha district boarded the vessel and their friends and family helped them in rowing the 500 metres to the temple. 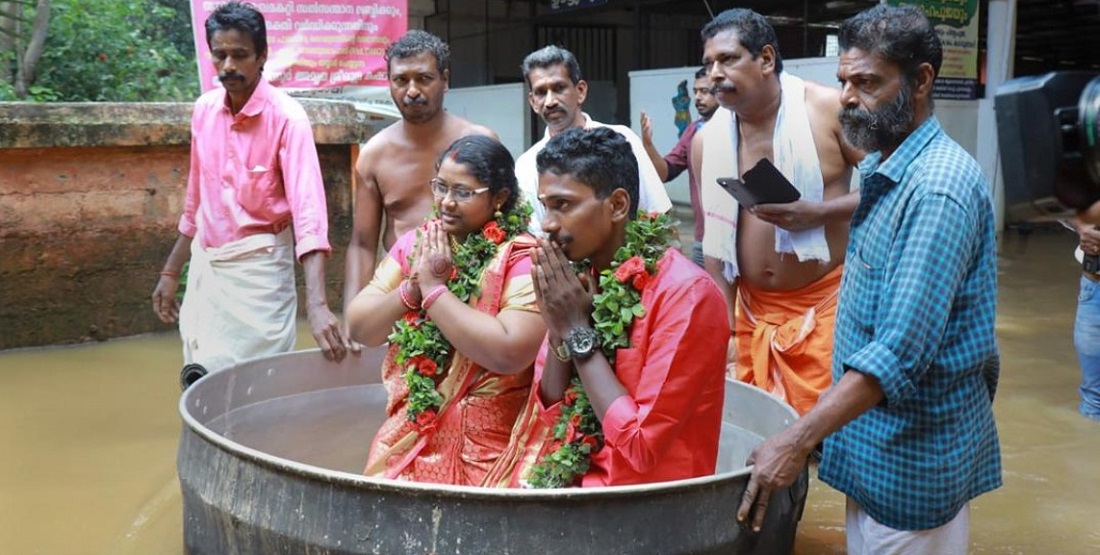 Love knows no boundaries! A couple from Kerala has proved the phrase by facing the flood to get married. Akash and Aishwarya sailed through the flooded streets of Kerala in a cooking vessel to reach the venue of their wedding.

Following the recent heavy downpours that have pounded the state, Akash and Aishwarya from Alappuzha district had to travel to Thalavady on the cooking vessel. The two boarded the vessel from a nearby residence, and their friends and family helped them in rowing the 500 metres to the temple.

The wedding could only be attended by close family. Many areas of the Alappuzha district, particularly in Kuttanad are flooded. Even when it rains in the adjacent districts, the region is waterlogged as around ten rivers join the Vembanad Lake which is close to Kuttanad. In addition, the location lies below sea level.

During the 2018 floods, similar cooking vessels were often used to rescue and transport people trapped in their homes. The newlyweds were accompanied by a small group of relatives as they married in a flooded hall adjacent to the temple.

The couple told reporters that they had kept the number of invitees to a bare minimum because of Covid-19.

The couple said that because the wedding was scheduled for Monday, they decided to go forward with it as it was an auspicious day and they didn't want to postpone it any further.

"We all are happy that the wedding took place at the planned auspicious time,” says Aishwarya.