KL Rahul may lead in ODI series against Proteas if Rohit fails to recover in time: Report 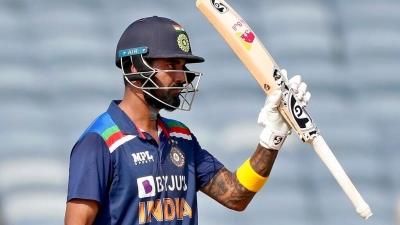 Stylish opener KL Rahul is likely to captain Team India in the upcoming three-match ODI series against South Africa if the newly appointed skipper, Rohit Sharma fails to recover in time.
Rohit was named India's limited-overs captain ahead of the start of the South Africa tour earlier this month. He was also appointed vice-captain of the Test side.
However, he got injured (hamstring injury) during the training session in Mumbai and was later ruled out of the Test series against Proteas.
He is currently at the National Cricket Academy (NCA) in Bengaluru where he is working on his recovery.
Earlier, the Indian cricket board (BCCI) had said that Rohit might return in three weeks to lead the team in the ODI series, starting on January 19, 2022.
But now a report by Sports Today is suggesting that he is unlikely to recover in time and KL Rahul might lead the team.
KL Rahul made a brilliant start to the Test series against South Africa as he hit an unbeaten ton (122*) on Day 1 of the ongoing first Test in Centurion. With this, he became only the second Indian opener to score a century in the Rainbow Nation after Wasim Jaffer's century in Cape Town in 2006-07.
Source IANS