The president has deployed 5700 People’s Liberation Army soldiers to the province, which is 650 km southwest of Beijing, for rescue and search.

For the past three days, the internet is displaying horrifying videos and pictures of the flood which occurred in China. The most terrific video till now has shown the over flooding inside a metro line at the Zhengzhou city, which the population of over 1.2 crore citizens, who are waiting for rescue.

More rain is expected for the next three days and the president has deployed 5700 People’s Liberation Army soldiers to the province, which is 650 km southwest of Beijing, for rescue and search. On Wednesday, it was reported that the rainfall has made the situation of flooding worse and which has to lead to the rise in the level of rivers and damaged the dams. Railway sections are suspended and flights are canceled.

In Luoyang city, people are scared that the 20-meter long bridge can collapse anytime due to the situation, but till now no such report of dam failure is reported. The president has ordered to bring up flood relief forces and has mentioned the requirement to decrease causalities, keeping in mind hygiene and disease prevention.

The cause behind the heavy flooding is the coming up of the Typhoon In-Fa. The typhoon is accompanied by air currents, which have carried atmospheric water, concentrating at the Zheng.

Zhou city, which is surrounded by Funiu and Taihang mountains. However, weather change is unpredictable, the risk of waterlogging at the surface increases. Last year, flooding had caused $25 billion and 200 people dead, causing damage. 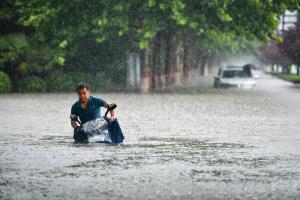 It is harder to control floods because the Yellow River in Zhengzhou city is the second largest river in China. Man-made dams and reservoirs are created in the country to migrate flooding, but these dams are not able to hold on to water because of such a huge amount of rainfall.

A climate analyst for Greenpeace East Asia, Li Shou said that it is an alarm bell for China indicating the rise in climate change. Another expert, Benjamin Horton, the director of earth Observatory of Singapore reported that due to the increase in global warming the atmosphere of Earth hold more moisture resulting in heavier downpours.