Mikel Arteta had to wait a long time to play in the Premier League since his last appearance against Brighton, and with the international break keeping the Gunners injury-free, he was able to field a solid team. 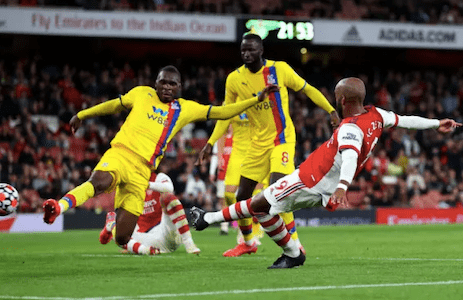 Christian Benteke and Odsonne Edouard goals were cancelled out by a last-second Lacazette goal as Arsenal salvaged an undeserved 2-2 draw against Patrick Vieira's Crystal Palace on Monday night.

Also Read:Italian Serie A 2021-22: A controversial 1-0 defeat for Roma by Juventus
Mikel Arteta had to wait a long time to play in the Premier League since his last appearance against Brighton, and with the international break keeping the Gunners injury-free, he was able to field a solid team.
Also Read: T20 World Cup: #BoycottPakistan trends on social media ahead of Indo-Pak clash
In an attack-minded team, his back five stayed unchanged, with the sole change coming in midfield, when Albert Sambi Lokonga was replaced by Nicolas Pepe. It was business as usual up front, with the manager sticking with the same starting lineup that beat Burnley 1-0 earlier this season.

Arteta built a positive squad, which resulted in an equally great start. Pepe was prominently involved in the early minutes, and Vicente Guaita wonderfully saved his curling attempt, but only into the path of Aubameyang, who scored superbly from a tight angle.
Arsenal vs. Crystal Palace player ratings In the closing seconds, Alexandre Lacazette snags an undeserved 2-2 draw for Arteta's team.
Palace continued their good start by having the majority of possession and cutting open the clearest chances, with Emile Smith Rowe seeing an attempt well saved. Palace then grew into the game, enjoying the most of possession and carving open the clearest chances. The second half ended with James McArthur escaping with his life.
Following the interval, Thomas Partey came within a whisker of scoring his first goal, only to be caught out in control, allowing Benteke to equalise.
Arsenal struggled to develop in phase one, therefore Lacazette was sent in to assist the team regain control of the game. It made a difference, but the goal came from the opposite direction. Edouard took advantage of Sambi's pickpocketing this time.
Late in the game, Tierney struck the crossbar as a limp. Arsenal tried for a goal, but they were not deserving of one. The three points Palace earned were richly deserved. Lacazette, on the other hand, grabbed it. Undeservedly so.