The chaos blew up after two SUVs allegedly ran over a group of protesters starting against the farm laws, who were demonstrating at the Tikona-Banbirpur road. 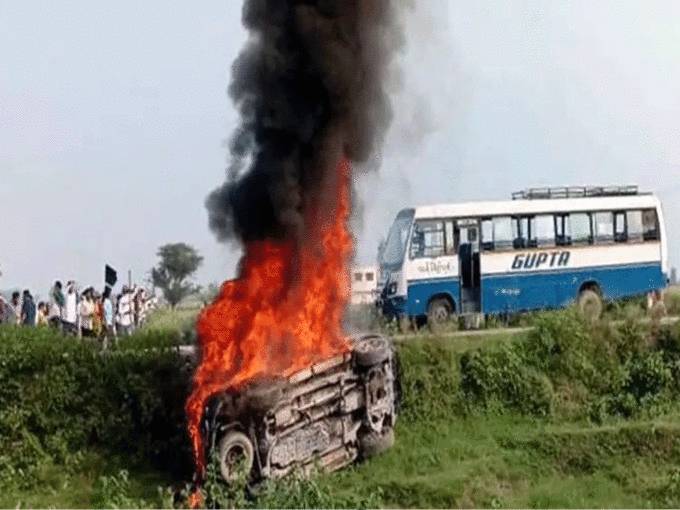 Eight people were killed as a result of the violent incident that took place over the visit of UP Deputy Chief Minister Keshav Prasad Maurya's, officials said.

Union Minister Ajay Mishra's son Ashish Mishra alias Monu and his supporters have accused the protesting farmers of igniting two SUV vehicles and thrashing four people to death including Teni's driver who was travelling in the vehicles.

The chaos blew up after two SUVs allegedly ran over a group of protesters starting against the farm laws, who were demonstrating at the Tikona-Banbirpur road.

Farmers have alleged that the Union Minister was in one of the vehicles that ran over the people. The charge has been denied by Mishra.

BJP workers and a driver named Monu were beaten to death by "some elements" amongst the protesting farmers, Mishra said, adding it happened after a car in which they were travelling turned turtle following pelting stones.

The driver was beaten to death, despite playing mercy for his life with folded hands, but his life wasn't spared and the violent mob thrashed the driver to death.

Misha said neither he nor his son was present at the location when the incident occurred. Meanwhile, the incident has drawn sharp criticism from the opposition parties and farmers organisations.

The video of the angry mob and the violence is going viral on social media, where the driver can be seen covered in blood and his head being crushed. The fear of death was visible on his face and eyes as the mob stood in front of him.

The driver was heard saying dada-dada with folded hands, requesting the mob to leave him. Some people from the crowd said kill him.